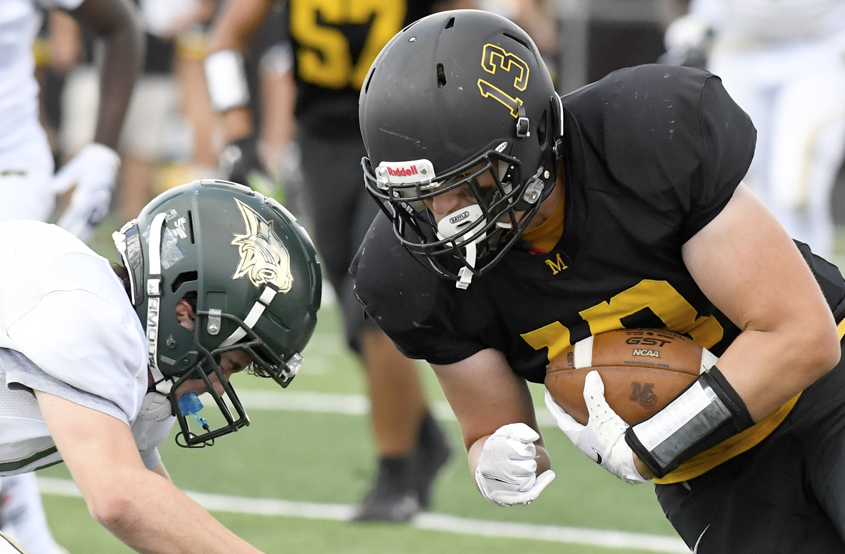 September 11, 2021
By Walter J. O’Neill, Jr.
Over the past five years the Falcons football team at Monmouth Regional has 15 wins and 32 losses. Their worst season was back in 2019 when they were winless in nine games.

That was the first year for Dan Wendel as head coach, it was a rough year. Last year his squad finished 2-6 and he is looking for good things this season.

“Last week we were hanging tough with Manchester, but just couldn’t get the finish we needed,” said Wendel. Monmouth Regional lost their opener 20-14. “We graduated a lot of kids that had experience in skill positions. That being said, this group of players are all determined and hard working. We have size, speed and the desire to win.”

Saturday afternoon, September 11, before the Falcons hosted the Wildcats of Pinelands, the Tinton Falls Fire Department had several firefighters in full gear at midfield holding 9-11 remembrance flags and paying tribute to a member of their own.

The game didn’t start well for the Falcons as their third offensive play resulted in an interception and 44-yard touchdown run by Pinelands. The Wildcats attempted a two-point conversion and failed, but they had a 6-0 lead with 10:04 left in the first quarter.

Five minutes later with 4:28 left in the quarter the Falcons scored on a three-yard dive into the end zone by senior Frankie Harris-Thomas. The extra point failed and the game was tied at six. Unfortunately, Harris-Thomas suffered a severe injury which required the first aid squad to transport him to the hospital. We do not know the extent of his injury, but wishing him a speedy recovery.

During the second quarter, Evan Booth a sophomore defensive back at Monmouth Regional, recovered a Pinelands fumble on the Wildcats 26 and returned it to the 11-yard line with 9:39 left in the first half.

On a fourth and two at the Wildcats two-yard line, Anthony Jenn, junior quarterback, fumbled the ball. However, it was recovered by Nelson Harris-Thomas (twin brother of Frankie) for a Falcon touchdown. Monmouth Regional went for two points and Jenn connected with Ta’haj Wiggins and they were up 14-6.

With 1:20 left in the first half, Jenn completed another pass to Wiggins. This time it was 18-yards for a touchdown. The two-point conversion attempt was good as Jenn hit Loukas Plasteras and the Falcons were up 22-6.

Pinelands fumbled their punt snap to start the third quarter and Monmouth Regional recovered at the 14-yard line of the Wildcats. They were in the red zone, but after several plays for loss of yards and a quarterback sack Pinelands took possession at their own 23-yard line. The third quarter ended without any score.

Pinelands with six minutes left to play scored and were down 22-14. This is the point in the game when Frankie Harris-Thomas was injured. It would have been understandable for the Falcons to fall apart mentally after seeing a teammate injured. These Falcons however didn’t fold or give-up. They were fired up.

With just over two minutes remaining in the game, Jenn found Plasteras for a 22-yard touchdown, and took a 28-14 lead. That is how the game ended with the Falcons 1-1 on the season.

Jenn had a great day throwing as he completed 15 of 24 passes for 153 yards. Wiggins had four catches for 53 yards, Frankie Harris-Thomas caught five balls for 43 yards, and Plasteras had four receptions for 36 yards.

On the ground, Julian Jones, junior, had 16 rushes for 68 yards. Jeremiah Robles, senior, had 59 yards on eight touches.

Falcons will have three consecutive road games. They travel to Keansburg on September 18, for a 12:00 noon kickoff. September 25, they are in Lakewood for a 1:00 pm start and October 2, in Keyport for a noon kickoff.