Believe: a Christmas Concert at Christ the King Parish 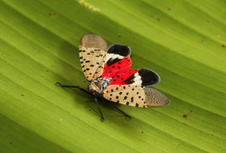 You may have noticed New Jerseyans doing a strange “dance” before the weather turned cold. It’s the Spotted Lanternfly Stomp, and it was performed in a variety of outdoor settings, including sidewalks, public parks, private yards, farms and orchards.

The purpose of the Stomp was to help eradicate the spotted lanternfly, an invasive insect that can suck the life out of plants and trees, including valuable agricultural crops. The Stomp is exactly as it sounds: Spot a lanternfly on the ground and stomp it dead. 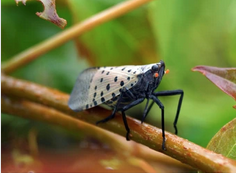 The lanternfly is not always colorful and may be hard to see while in a tree.

The colorful lanternfly is a native of Asia and was accidentally introduced in Berks County, Pennsylvania, in 2014. Lanternflies crossed the Delaware River into Mercer, Hunterdon and Warren counties three years ago, and have since been seen in 20 of New Jersey’s 21 counties.

Lanternflies feed on the sap of plants and trees, taking away their strength. They also leave behind a sugary liquid called “honeydew” that encourages fungal growth, further weakening the plants.

The spotted lanternfly’s preferred host is the Tree of Heaven (Ailanthus altissima), a common non-native tree. But lanternflies also feed on more than 70 different types of plants; favorites include grape vines, apple and peach trees, basil plants, vegetables and hops. They also like black walnut, maple, willow and cherry trees.

Does stomping on them make any difference and can anything be done to get rid of them?

Matthew Aardema, a professor of biology at Montclair State College, believes it may be too late to keep them from becoming permanently established in this state we’re in.

“They have all the characteristics of a very successful invader,” Aardema points out. “They’re highly mobile and can easily spread by their own power. They have a high reproduction rate, meaning their populations increase very quickly. They can feed on a large number of different host plant species, meaning we can’t really just target one host. And they currently have no predators or known pathogens that can act to slow their rate of population growth.”

“Stomping on the lantern flies probably makes virtually no difference,” he adds. “The population in New Jersey is already so large that this is only killing a very small fraction of the insects. Furthermore, in my experience the bugs most encountered on sidewalks, etc., are already on their way out, so to speak. They’re mostly adults that are already weakened and that have probably already reproduced.”

Adult lanternflies can’t survive the winter, and those in New Jersey are likely dead after the last few weeks of sub-freezing nighttime temperatures. But they’ve left egg masses behind, and that’s where New Jerseyans may be able help – at least somewhat.

The New Jersey and U.S. Departments of Agriculture are working this winter on lanternfly control, with about 20 survey crews treating and scraping away egg masses. The state is asking for the public to help by eliminating egg masses wherever they see them.

“The egg masses are something to keep an eye on at this time of year,” says Amanda Tokash-Peters, an assistant professor of biology at Centenary University who is conducting research on spotted lanternflies. “For every egg mass we can take out this winter, that’s 30 to 50 lanternflies that won’t be around next summer.”

Tokash-Peters is researching microbes in the lanternfly microbiome, in the hope of eventually identifying bacteria that can reduce their population, just like bacterial mosquito control. But a potential bacterial control for lanternflies is at least a couple of years away.

In the meantime, will scraping egg masses help?

According to Dr. Emile DeVito, New Jersey Conservation Foundation’s staff biologist, it could help in your immediate surroundings, like your yard or garden. Egg masses scraped on your property this winter will mean fewer lanternfly nymphs in the spring.

But, overall, scraping also seems unlikely to make a dent in the state’s lanternfly population.

To illustrate why elimination will be nearly impossible, Aardema said he has discovered large numbers of lanternflies deep in forested areas where no one is likely to find them. Even if these populations were found, he added, any efforts to eliminate them using insecticides would be ecologically damaging. He recommends focusing control efforts on protecting agricultural crops.

So if you want to scrape lanternfly egg masses around your yard, go ahead. It can’t hurt. Scraping is more effective than stomping but you may want to save your energy for more fun and constructive activities, like establishing a native plant garden while you wait for biological controls.

“The only method that will result in significant control of spotted lanternflies will be the identification of a natural pathogen such as a bacteria, virus or fungus,” says DeVito.

Tokash-Peters said lanternfly egg masses are about the size of a nickel or quarter, and look like blobs of mud or concrete. Because they’re well camouflaged on tree bark, you’ll have to look closely to spot them. “If you have a tree that was covered with lanternflies over the summer, there are probably several egg masses,” she advised.

The best method of eliminating egg masses is to scrape them into a plastic bag, crush them as much as possible, and throw the bag into the trash.

Another way to keep egg masses from hatching, according to the state Department of Agriculture, is using “golden oil,” an organic, soybean-based product that can be sprayed on egg masses.

For more information on spotted lanternflies, go to www.nj.gov/agriculture/divisions/pi/prog/pests-diseases/spotted-lanternfly/. To see a video on how to scrape egg masses and what to look for, go to https://bit.ly/3lGj4Ds.