‘Another win for Eatontown!’ says Mayor Anthony Talerico in open letter to residents

Cory R. Cole, 51, of Brielle, pled guilty on Monday, March 21, in front of Monmouth County Superior Court Judge Joseph W. Oxley, to three counts of third-degree Theft and one count of fourth-degree Forgery. Under the terms of the plea agreement, Cole faces probation with 180 days in Monmouth County Correctional Institution; however, the State will recommend non-custodial probation if Cole pays $8,400 in restitution to two separate victims prior to the sentencing date. No victim contact is also part of the agreed deal. 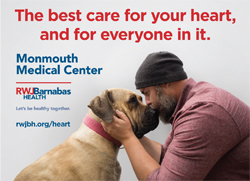 Cole was indicted Friday, June 11, 2021, on a nine-count indictment that included one count of second degree Theft By Deception, two counts of 3rd degree Theft by Failure to Make Required Disposition of Property Received, three counts of 4th degree Forgery, and three counts of 4th degree Uttering a Forged Instrument.
An investigation by the Monmouth County Prosecutor’s Office revealed that Cole, who buys, flips, and rents real estate, forged a letter from his former matrimonial attorney in order to falsely establish a judgment she had against him for unpaid attorney’s fees had been satisfied, and Cole submitted this letter to enable his purchase of a property on Borrie Avenue in Brielle. Cole would not have been unable to secure the $425,000 loan to purchase the property if the lender was aware the judgment against Cole was outstanding.

Additional investigation revealed that Cole illegally retained $4,200 security deposits from tenants at two separate properties in Brielle. He attempted to justify retaining the security deposit of his tenants on Fisk Avenue by claiming they owed money in unpaid utility bills on the property and providing them with a forged bill from New Jersey Natural Gas that falsely indicated they had an outstanding balance. The other tenant, who signed a lease to rent the Borrie Avenue property, was never even able to move into the property.

A review of bank records revealed that Cole deposited her $4,200 check into a bank account and that within days, he withdrew the bulk of it in cash. The investigation further revealed that to satisfy the Brielle School District’s residency inquiries with respect to the woman’s children, Cole uttered a forged lease to the school district indicating that the victim had moved into a different property that he owned in Brielle, which was in actuality being rented by someone else.
Cole resigned from his employment with the Ocean Township Police Department on the heels of the investigation, after the initial set of criminal charges were filed in January of 2020.

Cole is set to be sentenced before Judge Oxley on August 12, 2022.
The case is being prosecuted by Monmouth County Assistant Prosecutor Melanie Falco, Director of the Office’s Professional Responsibilities and Bias Crimes Unit.
Cole is represented by Allison Friedman, Esq.