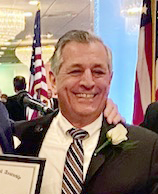 Recently, the Amerigo Vespucci Society (AVS) of Long Branch New Jersey held a 129th Anniversary Dinner at the Breakers in Spring Lake. Approximately one hundred and fifty people attended the event which celebrated the last history of the organization and honored one of its members, Mr. Joseph Mossa, as their Man-of-the-Year.
The evening began with a cocktail and hors d’oeuvre hour and the program included live music from Zach Alexander, one of the New York Metro area’s top Sinatra era singers. Proclamations were read and presented from various local organizations and political offices. AVS President Joseph Sirianni stated that the organization was, “proud to say we’ve been around since 1875 and incorporated since 1895. This year we honor a fellow member who has led by example and has exemplified what an Italian-American should be.”
The event was not short of dignitaries from the greater Long Branch area. In attendance were Long Branch Mayor John Pallone, Councilwoman Dr Mary Jane Celli, Councilwoman Dr Anita Voogt, Councilwoman Rose Widdis, Councilman Bill Dangler, Councilman Mario Vieira, Monmouth County Commissioner Director Tom Arnone, Deputy Director Commissioner Susan M. Kily, Commissioner Nick DiRocco, Commissioner Ross F. Licitra, Ocean Township Councilman Rob Acerra, and Monsignor Sam Sirianni of the Cathedral of St Robert Bellarmine. Proclamations that were received from notable dignitaries such as Congressman Frank Pallone (District 6) and State Senator Vin Gopal (District 11)

The highlight of the evening took place when AVS Vice President Joseph Mossa accepted his award and proceeded to give a very heartfelt and emotional speech about the struggles of his ancestors as they sought a better life in America. He explained the sacrifices made by his ancestors who left their homeland at a very young age, departing with very little and accompanied by no one. He continued to describe how they emotionally decided to say goodbye to their families in their homelands to work extremely hard in a foreign land, America, so that their future family generations could benefit. Some of the emotional details of his family’s stories had many in attendance in tears, including Mr. Mossa’s elderly mother.
AVS Man-of-the-Year Joseph Mossa was born on October 24, 1960 at Perth Amboy General Hospital to Carmine Anthony and Maryann (Cuccinello) Mossa, and is one of four children. His paternal and maternal families emigrated from various parts of Italy including Rome, Naples, Bologna and Bari. Joseph graduated from Saint John Vianney High School in 1978 where he was a member of both the men’s cross country and wrestling teams. In 2006 Joseph was inducted into the Saint John Vianney Athletics Hall of Fame. In 1983 he earned a Bachelor’s degree in marketing from King’s College in Wilkes-Barre Pennsylvania.  While growing up in Holmdel Joseph developed a passion for wrestling at the age of twelve. His passion for the sport continued into adulthood as he coached for Saint John Vianney, Holmdel and Manalapan high schools, for a combined total of thirteen years. In addition, Joseph has been a New Jersey Wrestling Official for the past nine years and continues to feed his passion for the sport.

After graduating from King’s College Joseph immediately began his professional career as a sales executive with Wallace Computer Services for twenty-two years.  During his tenure, he earned the title “Salesman of the Year” twice as well as earning the honor as member of the “Outstanding Performance Club” multiple times.  Over the last fifteen years, Joseph has been employed in the digital payments sector.  He is currently the ISV Sales Manager for CardKnox, a privately held Fidelity Payments company based in Howell, New Jersey. His outgoing personality, love of people, along with his natural ability to “get along with everyone”, have assisted in leading him into a successful career in sales and sales management.

Joseph is also very active in his community. He previously served as President of the Saint Rose of Lima Sports Board, Chairman of the Saint Veronica’s School Board, member of the Mother Seton Academy School Board and is a current member of the Business Advisory Council at King’s College – McGowan School of Business. Joseph is also an usher at Saint Veronica’s Parish in Howell, New Jersey where his family are proud parishioners.

Joseph, known by his fellow Amerigo Vespucci Society members as “Joe”, is an active member of the organization. Shortly after joining, approximately twelve years ago, Joe, who was named after his maternal Grandfather Joseph Cuccinello, resurrected the society’s annual Saint Joseph’s Dinner, dedicating it to his late father, as that was the last time he and his two brothers John and Anthony were all together. Joseph has been chairing it each year thereafter with a sold-out attendance. Joseph also spearheaded an effort several years ago to raise funds for a perimeter fence around the society building and property. In addition, he has consistently been the society cook at monthly at-large meetings, has assisted in the annual Senator Thomas Gagliano Tripe dinner, and has joined the society in marching in numerous New York City Columbus Day Parades as well as attending many annual events. Joe has held various society executive board positions and is currently serving as Vice President.

In 2019, Joseph and his family joined friends on a trip to Italy. Upon returning he updated the membership at a monthly meeting regarding his experience. He explained that he had explored and visited various areas both in the north, in the greater Lombardy region, as well as the south, in the Calabria region, the region where the founders of the Amerigo Vespucci Society originated in 1875. He further explained that he had gained an increased appreciation of his Italian and Catholic roots and encouraged fellow members who had never been to Italy to visit and encouraged those who had previously visited Italy to return.
While Joseph is quite active in his community, church and work life, his top priority and passion is his family. He and his wife Lindsay met in 2002 and were married in November of 2005. They reside in Allenwood, New Jersey and have three beautiful daughters: Angela, Gianna, and Gabriella. Joseph plays an active role as husband and father, supporting each of their passions and interests. In November 2021, Joe welcomed Edward Mazariegos to the family when he and Angela were married.

AVS President Joseph Siriuanni stated, “We are honored to acknowledge Joseph “Joe” Mossa. An individual who values family, hard work ethic, the community, and his ethnic roots and religious faith. The Amerigo Vespucci Society is proud to call Joe Mossa its fellow brother member and congratulates him as being named the Amerigo Vespucci Society Man-of-the-Year. An honor well deserved!

The AVS was originally established as a mutual aid society where Italian men could congregate, escape from discrimination and anti-Italianism that began during the period of large-scale Italian immigration during the late 19th century. Since that time the society members have made it a priority to assist each other and their families when there was/is no other place to turn. Today, the AVS continues to be a mutual aid society as well as a 501(c)3 organization assisting individuals and organizations in the community and providing educational scholarships.  They are active in combating pervasive negative stereotyping and defamation of Italian Americans in the media and promote the extraordinary history and accomplishments of Italians and Italian-Americans. The AVS also promotes the admiration, general appreciation and love of Italy, its culture, society, arts and people.

Man-of-the-Year Joseph Mossa posing with the 2022 AVS Board Members.