Cale and Robinson light up the gym for 103 points

Facing the Question and Out and About with the Guzzi family 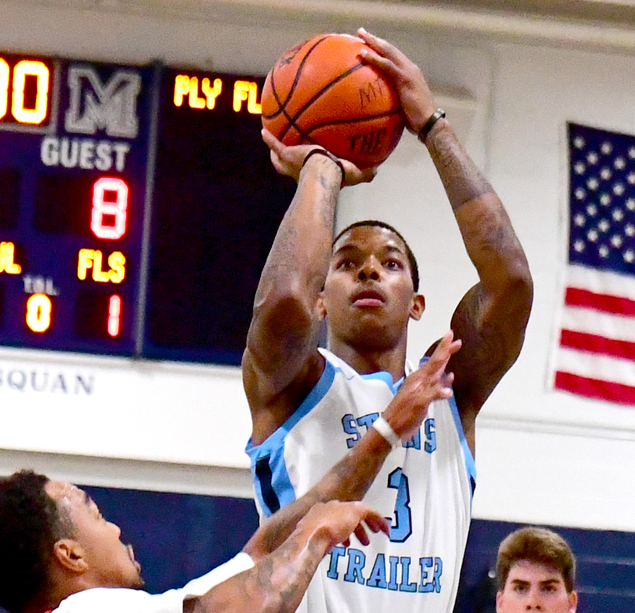 Focused is what's on the face of Shavar Reynolds (3) of Sterns Trailer as he goes up for 2 of his game-high 29 points. Sterns Trailer beat Sea View Jeep 143-123 in Jeresy Shore Basketball League action last week.

It’s very rare when a team has a dominating win and the star of the game was not wearing their uniform. That was the case last week when Sterns Trailer defeated Sea View Jeep 143-123 in a Patriot Mortgage Jersey Shore Basketball Game.

The gym was packed at Manasquan High School, where the JSBL play, and everyone was there to watch 5’8” Justin Robinson, point guard for Sea View Jeep. Robinson is the all-time leading scorer at Monmouth University with over 2000 points. He scored 64 in the loss to Sterns Trailer,  just 10 away from the JSBL single game record.
Sea View Jeep, coached by Tyler Schmelz, has a total of six JSBL championships, but only had six players suit up for the game against Sterns Trailer. Roy Mabrey, who is a tremendous offensive power on the floor was injured, and appears will be out for a few games. Sterns Trailer on the other hand had a deep bench and was able to rotate players in and out avoiding fatigue. Ron Pastore and Rick Brunson are the two men coaching Sterns this summer.

Right from the opening tip off you knew Robinson was going to have a great night. He took the tip and shot from half court and it was perfect. In fact, me made 12 of 22 shots from way outside the three-point arch. And in a game with players standing close to 7 foot, Robinson was also the leading rebounder with 16. He also had 11 assists, giving him a triple-double in the loss. Robinson also had one block and two steals.
“What can you say. He is just an amazing basketball player who is tremendously skilled,” said Pastore after the game. Sterns Trailer had a player who was also putting on a scoring demonstration. Myles Cale, 6’6” forward who graduated from Appoquinimink High School in Delaware and Seton Hall University, had 39 points in the win. He made seven of his 12 attempts from the three-point arch. He also had six rebounds, three assists, and one steal. “Myles had such a great all-around game for us tonight, as did Shavar (Reynolds) who had the duty of covering Justin.”
Reynolds, graduate of Manchester Township High School and attended Seton Hall and Monmouth University, finished with 29 points. He also finished with 10-assists, three rebounds, and two steals. With the win, Sterns Trailer is now 4-1 on the summer.
Sea View Jeep falls to 2-2 on the summer. Collin Stewart had 16 points, Sean Grennan had 15, and Pat Andree ended up with 14 in the loss.
July 19, Sea View returns when they face undefeated RKE Athletic at 7:00 p.m. They also have another 7:00 p.m. game on July 20, when they take on Assistive Choices, Inc.
Sterns Trailer plays next on July 21, at 8:30 p.m. when they take on Assistive Choices, Inc. That is their only game of the week. Next game for them is on July 27, at 7:00 p.m. against RKE Athletic.

He was just 10 points away from the Jersey Shore Basketball League record for the most points scored in a game. Justin Robinson (12) of Sea View Jeep finished with 64 points, but his team fell 143-123 to Sterns Trailer.

Damon Garrett (2) of Sea View Jeep attempts to fdive to the hoop during the 143-123 loss to Sterns Trailer.

Focused is what’s on the face of Shavar Reynolds (3) of Sterns Trailer as he goes up for 2 of his game-high 29 points. Sterns Trailer beat Sea View Jeep 143-123 in Jeresy Shore Basketball League action last week.

Kessly Felizor (33) of Sterns Trailer, a graduate of Highstown HS and a New Haven Charger 2020 college graduate, goes up for two in the win over Sea View Jeep.

Focused is what’s on the face of Shavar Reynolds (3) of Sterns Trailer as he goes up for 2 of his game-high 29 points. Sterns Trailer beat Sea View Jeep 143-123 in Jeresy Shore Basketball League action last week.