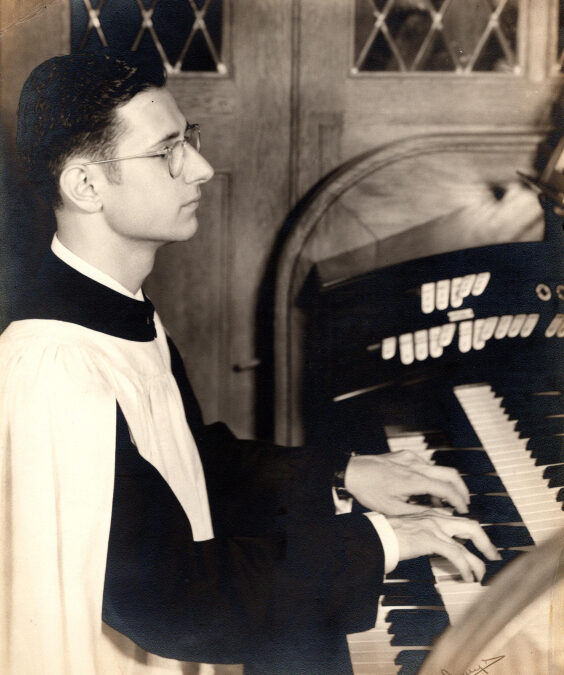 Bill graduated from Long Branch High School in 1945 and served in the United States Army Air Corps from 1945 to 1947.  A gifted musician, he began playing the organ professionally at the age of 15 and studied music in Boston and New York City. Bill continued to play the organ professionally for 75 years, serving as the organist and choirmaster for St. James’ Episcopal Church in Long Branch, NJ; St. Peter’s Episcopal Church in Peekskill, NY; St. George’s Episcopal Church in Newburgh, NY; St. Mary’s Catholic Church in Deal, NJ; and Our Lady of Mt. Carmel Roman Catholic Church in Asbury Park, NJ. In addition to his church work, Bill was also employed for 10 years at Prudential in Newark and Iselin, NJ.

Bill met his wife, Dorothy May, at St. James Episcopal Church and wooed her by playing “Tea for Two” on the piano while she was working in the kitchen. They married in 1951 and were each other’s best friends throughout their 71 years of marriage. He and Dorothy enjoyed traveling across the United States and Canada via train and took many wonderful trips together to England.

Bill was immensely proud of his grandchildren, who all have cherished memories of time spent beside Pop Pop at his piano or making homemade ravioli together in his kitchen. And he adored his great-granddaughters, who always brought a smile to his face.

Bill is survived by his wife, Dorothy May (Wilson) D’Amato; his daughter, Margaret Tanko (son-in-law Robert) of Woolwich, ME; his son, Christopher D’Amato (daughter-in-law Susan) of Blairstown, NJ; his grandchildren, Jennifer Eburg, Stephanie Wertz, Nicholas D’Amato, and Anthony D’Amato; his great-granddaughters, Harper Eburg, Ella Wertz, Morgan D’Amato, and Dylan D’Amato; his cousin, Fred Buonnano; his nephews, John Quinn and Richard Fasano; and his niece, Carole Meeker. He was preceded in death by his parents, Rosildo (Charlie) and Elvira D’Amato; and his sisters, Josephine Fasano and Olga Warren.

The family invites you to leave a letter of condolence through the Tribute/Guestbook link.

Born in San Lorenzo, PR, to Estanislao Gomez and Valeriana Torres.  He emigrated to NJ and settled in Long Branch.  He also lived in Chicago, Illinois for several years. He was employed in various jobs including Sun Bean Corp., Schwinn Bicycle Corp., Baldanza’s Bakery, and Old Orchards Country Club. He owned and operated El Coqui Restaurant, as well as a Goodwill store in Long Branch, NJ.
Placido had a love for gardening and growing.  Every spring he created a backyard garden full of vegetables for the summer months.  He was a devoted fan of the New York Mets and always entertained himself by watching WWE wrestling as well as playing dominos with family and friends. On weekends, he enjoyed going to Collinswood’s Auction and Flea Market or Englishtown Auction Sales and Flea Market shopping and selling merchandise.  He always emphasized hard work and made sure his children and stepchildren were deserving of a better future.
Placido is predeceased by his sister, Marta Gonzalez Gomez (brother-in-law Gustavo Gonzalez Martinez), his beloved brothers, Feliciano Gomez Torres (sister-in-law Felicia Gomez), Eusebio Gomez, and Jose Gomez. Surviving are his loving sister Julia Silva Gomez and sister-in-law Ruth Gomez. His two sons, Ruben Gomez and Edwin Gomez (daughter-in-law Yulissa Gomez), his three stepchildren Joel Rodriguez, Ofilia Martinez, and Luis Martinez. His grandchildren Alexandra Rodriguez, Anabella Rodriguez, Luis Martinez, Emily Martinez, Jayden Luke Gomez, Zoey Adeline Gomez, Alejandro Ortiz, and Sebastian Ortiz. He loved his many nieces and nephews.
Visitation for family and friends will be held on Thursday, July 21, 2022, from 6 pm to 8 pm and the funeral service will be on Friday, July 22, 2022, at 10 am both at Damiano Funeral Home, 191 Franklin Avenue in Long Branch.  Interment will follow at Glenwood Cemetery, 190 Monmouth Road, West Long Branch, NJ 07764. The family requests donations to Lymphoma Research and Foundation, Wall Street Plaza, 88 Pine Street, Suite 2400, New York, NY 10005 or https://lymphoma.org/

To send flowers to the family or plant a tree in memory of Placido Gomez Torres, please visit our floral store.

Barbara J. Cuje, age 83 of Long Branch, passed away peacefully on Monday, August 1, 2022 at Jersey Shore Center in Eatontown. Barbara was born in Long Branch and was a lifetime resident.

She was predeceased by her husband, Robert Cuje, Sr. and two sons, Robert Cuje, Jr. and Craig Cuje. Surviving are her daughter and son in law, Kathy and Mark Godsil, her son Joseph Cuje, 3 grandchildren, 8 great grandchildren and her Pomeranian, Duchess.

All services are private. The family invites you to leave a letter of condolence by selecting the Tribute/Guestbook link above.

Katherine Davis, 87 of Long Branch, passed away peacefully at home on Wednesday, July 27, 2022. She was born and raised in Long Branch and was a beloved mother, grandmother (Mom-Mom), great grandmother (GiGi), sister and aunt.

Katherine was predeceased by her husband of 40 years, James O. Davis, and parents, Joseph and Theresa Precopio, also of Long Branch. Surviving are her three sons James, Joseph, and John Davis and daughter, Mary Craig; four grandchildren; six great-grandchildren; two sisters and one brother; as well as many nieces, nephews and cousins. She was greatly loved and will be deeply missed.

In lieu of flowers donations may be made to the St. Jude Hospital, 501 St. Jude Place, Memphis, TN 38105 or the National Children’s Cancer Society, 500 N Broadway #1850, St. Louis, MO 63102. The family invites you to leave a letter of condolence by selecting the Tribute/Guestbook link above.

To send flowers to the family or plant a tree in memory of Katherine Davis, please visit our floral store.

Mary Lynne Rubin, aged 71 of Long Branch, N. J. died peacefully on Friday, July 15, at Monmouth Medical Center. Mary was born in Jersey City. She lived in Toms River prior to moving to Long Branch and partaking in independent living at Operation Life.

She was predeceased by her parents, Victor and Josephine Lundberg. She is survived by her loving husband, David, of 38 years. Mary was surrounded by family and friends who loved her dearly. Her passion for the Knicks and trips to Atlantic City were always one of the highlights of her life. Mary was one of the kindest people you could ever meet.  She opened her heart to all those who came in contact with her. She will be sorely missed.

In lieu of flowers, donations may be made to the Ladacin Network, 1703 Kneeley Boulevard, Wanamassa, NJ 07712 or through https://donatenow.networkforgood.org/ladacindonation. The family invites you to leave a letter of condolence by selecting the Tribute/Guestbook link above.

To send flowers to the family or plant a tree in memory of Mary Lynne Rubin, please visit our floral store.

Antonio “Tony” Vieira Guiomar, 57 years of age, passed away peacefully in his home on July 15. Tony was born to Manuel and Maria Guiomar on August 4, 1964 in Sao Mamede, Portugal before moving to Long Branch at 9 years old. Shortly after, he and his family moved to Oakhurst where he resided for the remainder of his life.

Tony was educated in both Long Branch and Ocean Township school systems graduating from Ocean Township High School class of 1982. His one and only priority was his family, always worrying about everyone else but himself. Whether it was someone’s worst day or best day, he was there to take the weight and stress from everyone else to make sure everything was perfect. No favor was ever too big or too small in his eyes.

He is survived by his father Manuel, his mother Maria, his sister Ilda, and his nephew Ryan that were lucky enough to be in his presence every single day. His selflessness and everlasting love for his family was unparalleled leaving behind a legacy of beautiful memories.

The family invites you to leave a letter of condolence by selecting the Tribute/Guestbook link above.

To send flowers to the family or plant a tree in memory of Antonio V. Guiomar, please visit our floral store.

Pauline was predeceased by her parents Raymond H. and Mary Alexzine Chase. She is survived by her brother James A. (Elaine) Chase, a nephew Eric A. (Carla) Chase and a niece, Rayna M. (Maurice) Foy along with a host of other relatives and friends. All services were private at Lawson Funeral Home, Long Branch.

Jesus Mauricio Elias was born March 24, 1967 to Leticia Colocho and Jose C. Elias in San Salvador, El Savador. Jesus came to the United States August 1990 and resided in Union City, NJ until he met and married his wife of 29 years Elizabeth. They moved to Long Branch in 1993.

Jesus worked for LTA Group as a forklift operator for 19 years then at Parkridge Management as maintenance until present. He was an active member at church for more than 20 years Camino de Salvacion.

Jesus was predeceased by his mother Leticia A. Colocho, his father Jose C. Elias, two grandmothers Blanca and Marta, and uncles from El Salvador.

He is survived by his loving wife Elizabeth; stepsons Domingo, Luis and Antonio; stepdaughter Irma; 12 grandchildren; 8 great-grandchildren; sister Yanira Elias from Yonkers; sisters Sara, Guadalupe and Marisol all from El Salvador; brothers Nelson, William, Walter, Alex and Marcos; aunts Gilma from NY and Marta Lisa from Maryland; as well as many nephews, nieces and cousins.

Jesus also was known as Maurico will surely be missed by many. Interment was private at Lawson Funeral Home

Claire Elizabeth McCue, a lifelong resident of Long Branch, passed away surrounded by loving family and friends on Friday, July 29, 2022.

Claire was a Technical Editor at various Publishing Houses such as AT&T, Bellcorp, Lucent Technologies, Telos and Lockheed Martin, along with the Telecommunications and Aerospace Industries. She taught Catechism and was a substitute teacher after retiring.

Claire loved children and had so much joy with her granddaughter, Gabby. In lieu of flowers, memorial donations may be made to St. Jude Children’s Hospital- 501 St. Jude Place Memphis, TN 38105, 1(800)213-6584.  For condolences, please visit www.fiorefuneralhomes.com. To send flowers to the family of Claire E. McCue, please visit our Heartfelt Sympathies Store.

To send flowers to the family of Andrea Melendez, please visit our Heartfelt Sympathies Store.