Facing the Question – How’s the ban on plastic bags going? 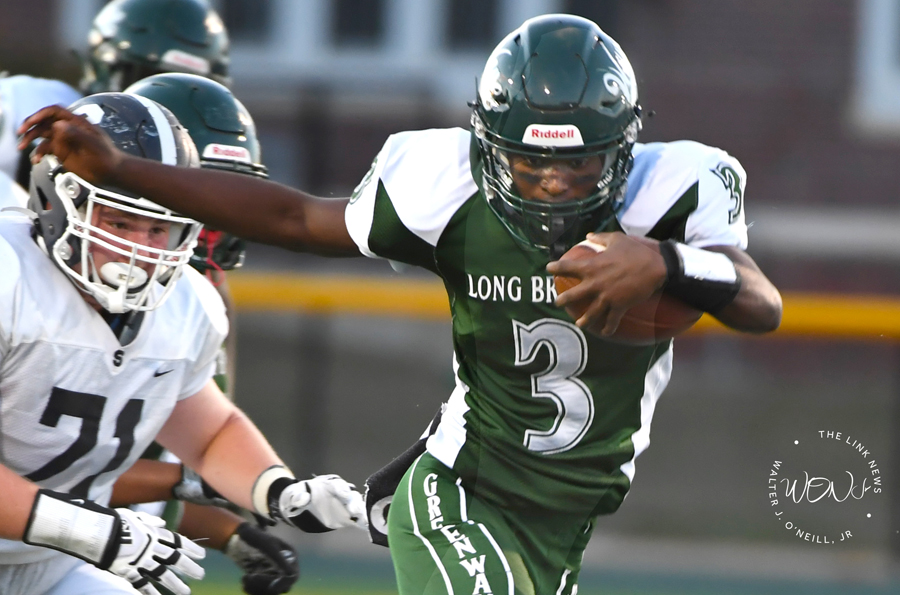 Starting quarterback for the Green Wave 2022 season is Earnest Reevey, #3, a junior.

By Walter J. O’Neill, Jr. – For the first time in 23 seasons Long Branch High School started the football season with a new head coach. Chad King took over the duty after Dan George announced his retirement last season. King is no stranger to the players or the system, being a longtime assistant under George and is a teacher in the district.

Last season the Green Wave finished 8-2, and won a playoff game before their season ended. Even with a new head coach, Long Branch will bring consistency to the field. King has many of the former coaches with him and is not looking to reinvent the wheel, since has many talented and athletic players who all have experience.

Long Branch won the opening coin toss on Friday night selecting offense. Middletown South kicked the ball into the end zone and the Green Wave started at their own 20-yard line. Leading the offense was junior Earnest Reevey. Using his arm and feet, along with a very fast backfield and big offensive line, Reevey worked the ball down to the Eagles 20-yard line. With 6:11 left in the first quarter, Reevey ran the ball in for the first touchdown of the game. The extra point was good and Long Branch looked unstoppable on that opening drive.

On their first possession of the game, Middletown South was only able to gain a total of 12 yards and was forced to punt from deep inside their own end of the field. Long Branch took over on offense at their own 36-yard line with 2:31 left in the first quarter.

First quarter ended with Long Branch up 7-0 and threatening to score again. In the second quarter, with 10:56 left to play in the first half, Zaheem Brown, junior running back, blasted through the Middletown South defense for a 32-yard touchdown. Wesley Garcia, junior kicker, missed the extra point. Long Branch was now up 13-0.

With junior quarterback Jake Czwakiel leading the Eagles, Middletown South  worked their way to the Green Wave 19-yard line with 3:05 left in the first half. They faced a fourth and 10, and attempted a field goal that came up short.

Long Branch came roaring right back with 33 seconds with a fourth and four at the Eagles 35 and King told Reevey to go for it. Long Branch got the yardage needed. But the next play had a penalty which put them with a second and 12 from the Middletown South 39-yard line. The Eagles stopped the Wave and the horn sounded to end the first half with Long Branch up 13-0.

Steve Antonucci, who has been the head coach at Middletown South for the past 25 years and had a career record of 206-61 going into the game, must have had one hell of a talk with his players during the halftime break. When they took the field in the third quarter, they were a much different team from the first half.

Middletown South started the third quarter on offense at their own 25-yard line. Czwakiel made a great deep throw and suddenly the Eagles were on the Green Wave seven-yard line with a first down. A few plays later, Czwakiel ran the ball in from two yards out and kicked the extra point pulling within six points of Long Branch.

The speed of the Green Wave was evident on the kick return as they took the ball all the way to the Eagles 45. A few plays later, Long Branch had a fourth and eight at the Middletown 31, when Reevey attempted a pass that fell incomplete with 5:42 left in the third quarter.

Fourth quarter, Long Branch had a fourth and 25 from their own four-yard line with 11:05 left to play. They had to punt. However, the snap sailed over the punters head and out of the end zone for a safety, giving Middletown South two points, now down 13-9 to the Green Wave.

Momentum changed on that single play, as Middletown South took the kickoff and drove deep into the Long Branch red zone. With 7:38 to play, and having a fourth and two at the Long Branch two, Colin Gallagher, junior running back for the Eagles powered his way in for the touchdown. Czwakiel made the extra point and Middletown South took a 16-13 lead.

With 1:50 to play, Gallagher sealed the victory for the Eagles with a 44-yard touchdown run and the extra point by Czwakiel gave the Eagles a 23-13 lead and victory. Czwakiel finished with 65-passing yards and Gallagher had 90 rushing yards.

Colin Gallagher (2) a junior running back at Middletown South, had 90 rushing yards and two touchdowns in the 23-13 win over Long Branch.

Leading a seconf half 23-point rally giving Middletown South to a 23-12 win over Long Branch was Jake Czwakiel (8) the junior quarterback.

Michael Hall (5) of Long Branch was deep inside the Middletown South red zone when he was hit by an Eagle defender before he could catch the pass from Earnest Reevey.

Making a hit on the Jake Czwakiel, (8) the Middletown South quarterback knocking the ball loose is Nehemiah Lambert (12) a sophomore at Long Branch.

Taking over as head coach of the Green Wave football squad is Chad King.

Sekou Kamau, #1, a senior running back and defensive back for the Green Wave attempts to break free of a Middletown South defender.

Starting quarterback for the Green Wave of Long Branch for the 2022 season is Earnest Reevey, #3, a junior.