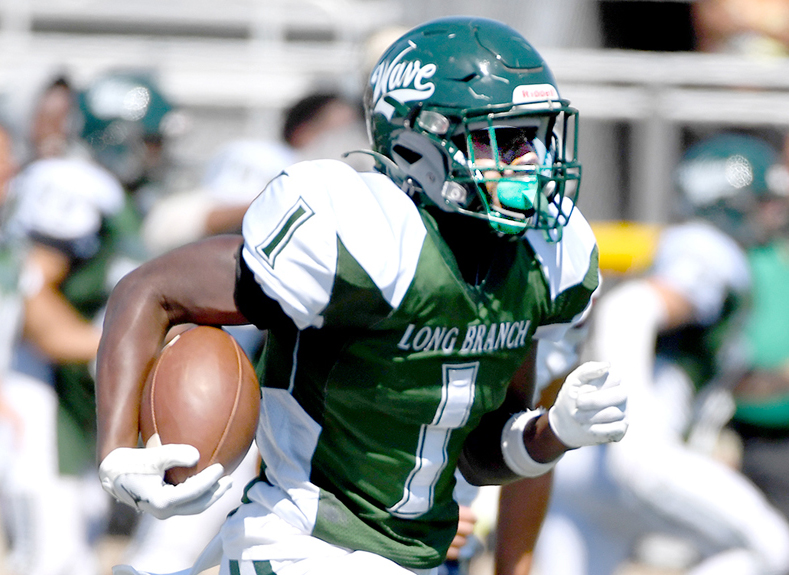 Long Branch High School senior running back Sekou Kamau (1) rushed for 201 yards and had three touchdowns in the 34-21 win over Lacey.

By Walter J. O’Neill, Jr.
Saturday afternoon the Green Wave of Long Branch hosted the Lions of Lacey High School in a Shore Conference Colonial division football game. Both schools were winless last week to kick off the 2022 season.
Lacey had the ball first to start the game gaining a fourth and short at midfield and were forced to punt. However, the Green Wave were called for having 12 men on the field giving the Lions a first down. A few plays later, Lacey had a fourth and seven and went for it resulting in a touchdown. They chewed up a lot of time on the clock as only 3:02 was left in the first quarter and Long Branch hadn’t even touched the ball.

On the ensuing kick, Sekou Kamau, senior running back at Long Branch, took the ball on his own eight-yard line and then blasted 92 yards for the touchdown. He was untouched on the run and it took less than one minute for Long Branch to even the score.
First quarter ended with both teams dead even at seven. The start of the second quarter had Kamau running again untouched for a 75-yard touchdown. His speed was just too much for the Lions defense. Wesley Garcia, junior, kicked his second extra point of the game and Long Branch was up 14-7 with just over seven minutes left in the first half.
With 2:39 left in the first half, Zaheem Brown, junior, ran 49 yards for the touchdown. He also had blistering speed and was untouched on his run. Garcia was perfect for the third time in the game and LB was up 21-7 going into the halftime break.
A lot of points were put on the scoreboard in the fourth quarter. Long Branch had two touchdowns, the first a 56-yard run by Brown and Garcia kick. The last touchdown for the Green Wave was a 79-yard run by Kamau who had an amazing game. Garcia was perfect on the afternoon making all five of his extra-point kicks.
Lacey added 14 points in the final quarter, but it was not enough as Long Branch improved to 1-1 on the season with the 34-21 victory. The Lions drop to 0-2.

Kamau finished with 201 rushing yards and three of the five Green Wave touchdowns. As a team, Long Branch rushed for 362 yards and 22 carries, an average of 16.45 yards per-touch. Alexander Daniels had some time at quarterback and completed four of six passes for eight yards. The Green Wave didn’t need a passing game that afternoon. Brown finished with 131 yards on nine touches and had two touchdowns.

Long Branch High School senior running back Sekou Kamau (1) rushed for 201 yards and had three touchdowns in the 34-21 win over Lacey.

Joseph Corley (55) a sophomore defensive lineman, fights off Lacey blockers to make the tackle on the Lions runner.

Having a great rushing game for the Green Wave was Zaheem Brown (11) a junior. He had 131 yards and two touchdowns in the win over Lacey on Saturday.

Long Branch didn’t throw much during the 34-21 win over Lacey as they had 362 rushing yards. Here, Aulander Daniels (9) a sophomore quarterback, throws a pass to Shamar Williams (6).

Shamar Williams (6) a senior at Long Branch has the look of determination in his eyes as he finds open ground during the Lacey game.