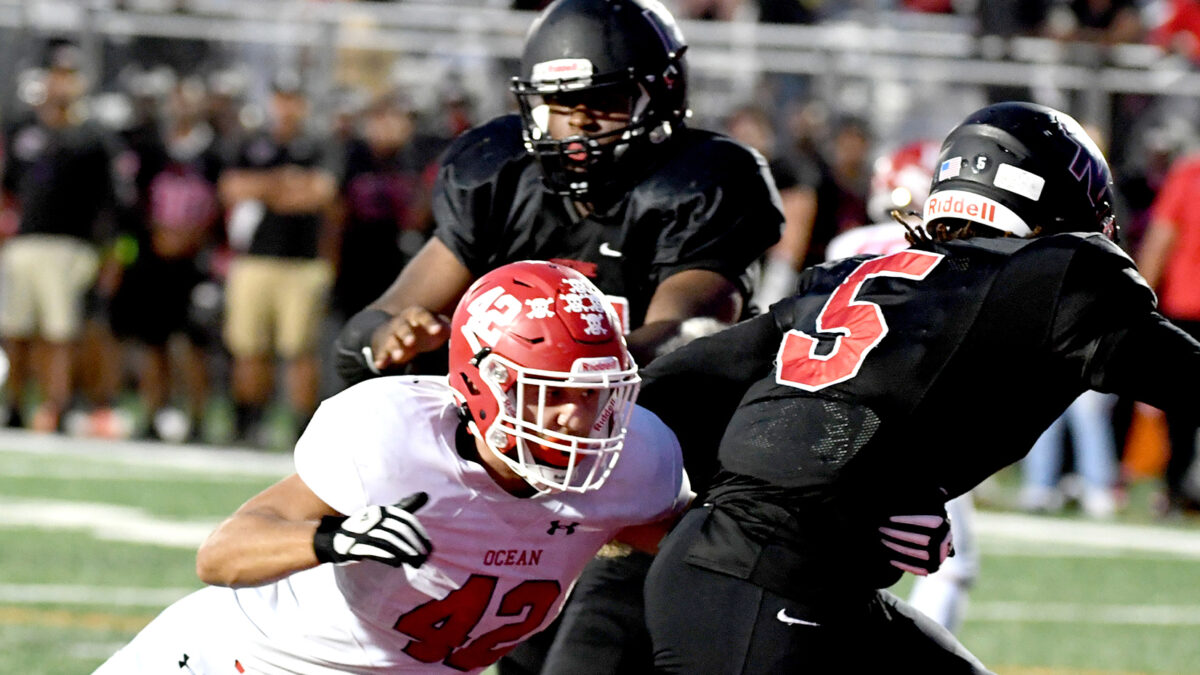 By Walter J. O’Neill, Jr.
In two weeks the Spartans of Ocean Township varsity football team have put up 70 points and only allowed a total of 28 to be scored against their defense. They also have back-to-back wins, which equals their entire total of the 2021 season.
Don Klein, who is in his 16th season as Ocean head coach, knew that this group of players were going to be special. He stated that they work hard, and have the desire and skills to win.

Leading the Spartans is 6’2” senior quarterback Tyler Douglas. He has dramatically increased his skill levels from last season, as his arm strength is amazing and throws with accuracy. His legs are so solid he is able to run through tackles.
Another big offensive weapon for the Spartans is senior CJ Flannigan, who is 5’9” and 160 pounds. He is not the biggest player on the field, but he has blistering speed and powers his way through opposing defensive lines.
Mateo Andrews, senior wide receiver, is a new addition to the Ocean program. He transferred in this school year from Neptune, who were the Spartans opponents on Friday night. Andrews wanted to make a big impact in the game, and didn’t disappoint.
On the first play from scrimmage, Douglas dropped back and fired a bullet to Mateo who was covered closely by a Neptune defensive back. Mateo caught the ball high in the air with his forearms. He pulledit in, hit the ground and took off for the end zone. which resulted in a 71-yard pass and reception for six points. The extra point kick was good and Ocean was up 7-0 with 10:12 left in the first quarter.

Mateo Andrews (88), a transfer from Neptune High School makes a 71-yard catch and run for the first touchdown in the 43-14 win over Neptune.

Leading the Spartan offense this season is Tyler Douglas (8) the senior quarterback who has a strong arm and quick feet.

Standing at 6’2″ and weighing in at 285 pounds is Nicholas Caruso (75) the junior center whose job is to protect Tyler Douglas (8) the Ocean Township quarterback.

Rushing for three touchdowns and finishing with 88 yards is CJ Flannigan (25) senior running back at Ocean. Here he blows through the Neptune defense.