One Night Stand Coming in Feb. at NJ Rep 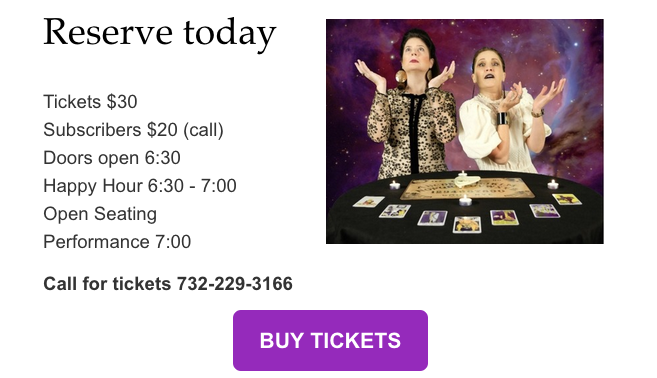 Fatima and Elsbeth Vole welcome you to their very real and not fake at all séance! Do you have a dearly departed you’d like to talk to? Any burning existential questions that only a true psychic medium can answer? Join Double D (Graceann Dorse and Nannette Deasy) as the legendary Vole Sisters in this mostly improvised, partly scripted, audience

participatory, completely hilarious paranormal comedy. But watch out, we just might be visited by some very real spirits who want to set the record straight!

Graceann Dorse is a writer, producer, and SAG-AFTRA actor based in NYC. Television credits include: FBI: Most Wanted, New Amsterdam, Bull, and Show Me A Hero. Her award-winning short films and pilots have screened at festivals across the country, including the Women in Comedy Festival, the New York Television Festival, and the Catalyst Content Festival. In addition to creating for film and TV, she is a writer/performer for the stage, having created storytelling pieces, sketches, and a one-hour solo show “Farty of One”.
Share