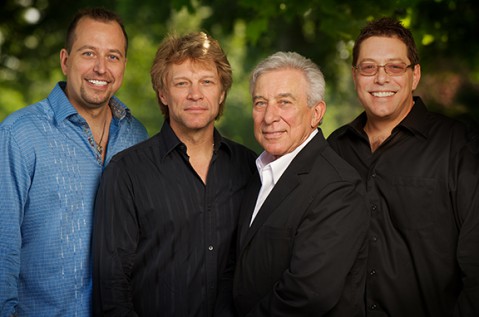 Every ethnic group has its traditions and for Italians it’s all about the sauce. Generation after generation pass down secret family recipes that reflect the region of their ancestry.

Sciacca, Sicily is where the Bongiovi family recipe originated. It has been passed down for three generations and the most recent keeper of the secret is John Bongiovi. He is the father of three sons, Matt, Anthony and the oldest, rock star Jon Bon Jovi.

During his illustrious career, Jon has been surrounded himself with his family. And cooking his famous meatballs and pasta sauce was his father. “Over the years celebrities and world leaders have tasted my dad’s sauce and said that he should bottle it,” said Anthony, the middle son. For the past 25 years he has been on tour with his brother as the video producer.

“This year I decided that I was not going to go out on tour with Jon,” said Anthony. So he and younger brother Matt along with dad started Jambco Inc., and started bottling the sauce that Great Grandma Bongiovi created in the late 1800’s.

Even though friends and celebrities told the Bongiovi’s that the sauce should be bottled nobody actually thought it would ever get done. “I have been living in California for the past 20 years and I had to learn how to make the sauce, but taking a family recipe and converting it into mass production was a bit challenging at first,” said Anthony.

There is something magical about the aroma of the sautéed garlic and onions simmering in a large pot. And when that sauce was spread over the pasta and the entire family would gather to eat and converse. Those are the memories that Jambco is hoping customers will experience when they open a jar of Bongiovi Sauce.

“My family name is on each bottle and it has to have the highest grade ingredients,” said Anthony. So they use restaurant grade tomatoes and all natural “Italians cook their sauce for hours to get the water out of it. Most bottled sauce adds water, but not ours.” And that is one of the secrets that make the bottled sauce taste like it was cooking on your stove for hours.

It took the Anthony and Matt a few attempts to get the recipe just right for dad’s approval. “I have not made sauce in a year,” said John. “It is so easy now to open a jar and have that fresh homemade flavor without the hours of preparation and cooking. Now when I cook fish and I want sauce I just open a jar.”

Richard Saker, Chief Executive Officer and President of Saker ShopRites Inc., which has over thirty supermarkets was one of those early supporters of the sauce. “Rich told us once we bottled it he would sell it in his stores and that is exactly where we are right now,” said Anthony. So far only Saker ShopRites are selling the Bongiovi Sauce, but the family has plans on expanding sales.

Anthony has taken his personal RV and had it wrapped with the Bongiovi Sauce logo and is traveling the area conducting tasting of the family sauce. “People are really surprised by the freshness and taste of our bottled sauce. They like the thickness and it’s all about the sauce,” added Anthony.

Currently Jambco has three different flavors on the market. Traditional marinara, garden style and the one with a little kick arrabbiata. “It not only had to get my dad’s approval, but my 95-year old aunt said she loves it and it passed her standards to have the Bongiovi name on it,” said Anthony.