Sea Bright — The borough has designated redevelopers for two areas in the borough, along the riverfront and where the old school used to be. 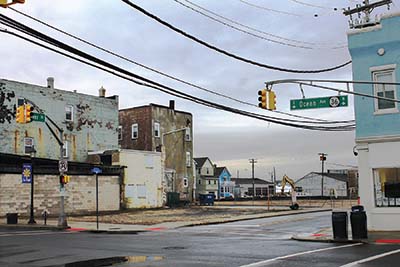 These vacant lots on downtown River Street have been declared an area in need of redevelopment, and the borough council has chosen The Break at Sea Bright, which has proposed turning the former school lot into a boutique hotel.

At the Feb. 4 Borough Council meeting, council approved two resolutions announcing the redevelopers for these areas.

Brooks Real Estate Development was designated to redevelop a group of properties along the Shrewsbury River from Front Street to River Street; and The Break At Sea Bright for the lots by River Street off Ocean Avenue.

This is a process which has been going on for several years.

In 2016, the Borough Council asked the Unified Planning Board to examine if these two areas met the definition of places in need of redevelopment. Declaring an area in need of redevelopment allows the borough more control over what gets built, making it easier to change zoning regulations. It also can give municipalities the ability to use eminent domain to take private properties.

Hearings were held last year, where the majority of residents present said they were in favor of both proposed uses for redevelopment.

Council voted 5-1 in favor of both resolutions on Tuesday, with Councilman William “Jack” Keeler voting no.

The project off River Street, referred to as The Break At Sea Bright, calls for turning the former school property into a boutique hotel. The vacant lot on the corner of Highway 36 and River Street, currently used for parking, would be converted into a business on the first floor and housing above it.

The resolution approving it noted that there have been other proposals for the land.

The school lot is owned by River Street Realty, which came to the Planning Board with a proposal to divide that lot into eight subdivisions with housing on each. There had been complaints from council and residents that no progress was being made on the lot.

In June, the Planning Board said that River Street Realty had to present them with detailed plans for how the subdivision would work within six months. They also needed to demolish the school building, which had sat vacant for decades and was considered in poor conditions. The school came down last autumn, but the details of the subdivision never came.

For Brooks Real Estate Development, which has proposed turning the riverfront into The Haven At Sea Bright — a series of houses and townhouses, as well as a new park, dog walk, public parking and boardwalk along the riverfront — eminent domain isn’t going to be needed. All the properties in the area are owned by a single company which wants to see this happen.

Trip Brooks, known locally for his development work in revitalizing Asbury Park, is involved with both projects.