Some who served never went overseas 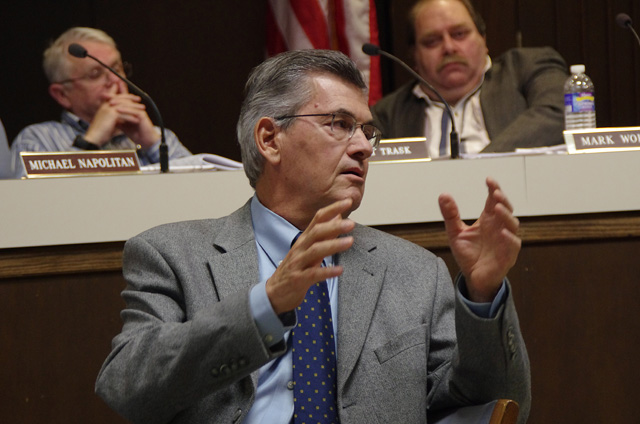 Borough Engineer Ed Broberg explains his concern to the Eatontown Planning Board, about some the roads in the proposed 120 unit housing development known as Weston Landing.

By Jonathan Weber
Eatontown — The hot button issued that probably cost the Democratic Party at least one of two council seats this month has begun to cool off.
Residents of the Woodmere section of Eatontown were concerned that a planned 120 unit housing project off Route 35 would dump hundreds of extra cars on their residential roads. But Jeremy Lange, a planner for Mazer Consulting LLC, when explaining the plans for the developer, the Pulte Group, assured residents Pulte doesn’t want a left turn out of Weston Landing onto Weston Place either. 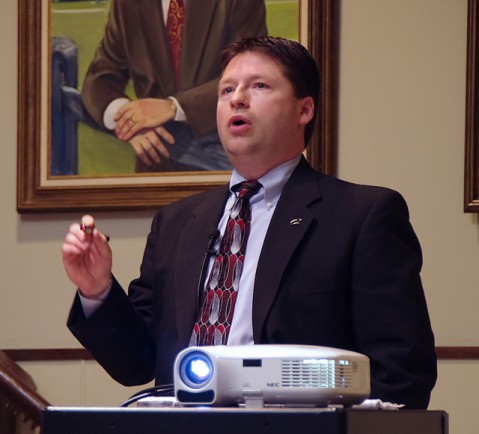 Jeremy Lange of Maser Consulting explains to the Eatontown Planning Board the 120 unit housing development planned for the former Mr. B's Golf Center on Route 35.

The Pulte Group is one of the ten largest homebuilders in the Northeast, with headquarters in Basking Ridge, New Jersey. They have taken over the land once used for Mr. B’s Golf Center which was the subject of a 2005 court case that cost the Borough of Eatontown over $600,000 in legal fees when a developer wanted to place over 300 housing units onto the twenty acres of the complex. Eatontown won the battle and the New Jersey Superior Court limited the site to 120 units and prohibited any right hand turns onto Weston into the Woodmere neighborhood.
After all the haggling, the construction never took place and the land has gone dormant.
At an Eatontown Planning Board meeting this week, Pulte first suggested the access road onto Weston, which was requested by fire officials, should curve to the right, with signage indicating no left turn, thus discouraging traffic from entering Woodmere.
The left hand turn onto Weston was suggested by the court and by fire officials looking for an alternative entry into the development. When neighbors were still upset by the turn, even though approved by the courts, Lange suggested Pulte would not be opposed to making a limited access road with a break away chain to be used only by emergency vehicles.
Even when Lange agreed to the elimination of the left hand turn for traffic, people in the Woodmere section still got up to complain about the now non-existent public access on Weston Place.
Jeremy Lange explained the new developer’s plans for Mr. B’s, which include a two way 24-foot wide roadways through the proposed complex, using wet ponds with sprinklers to stop mosquito breeding instead of underground vaults for water storage as originally proposed, and approximately 400 parking spaces when only 288 are required.
Pulte is seeking five variances from the Planning Board: a temporary exemption of setback for the construction trailer, single car garages for the interior units instead of a double garage, a 2,100 square foot clubhouse instead of 4,000 square feet, two tot lots instead of three, and a change in the signage for the entranceway.
Testimony before the Planning Board will continue at Eatontown Borough Hall at 7:30pm, Monday, December 12.