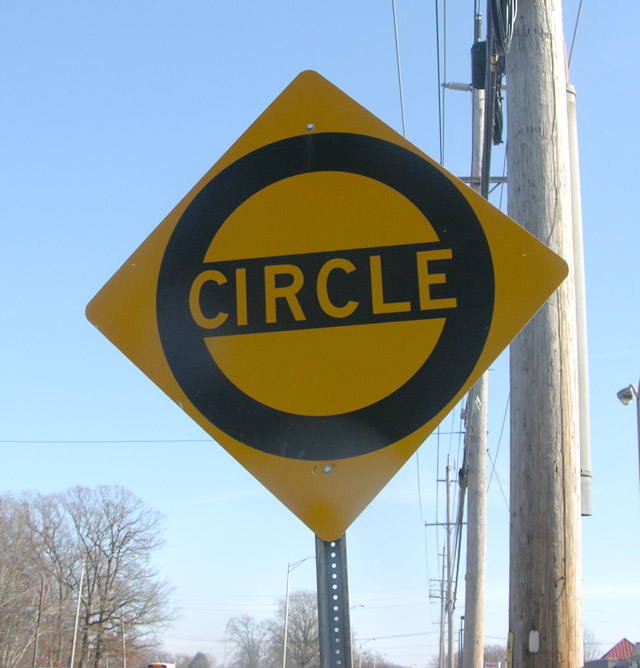 By Vincent Todaro
Ocean Township — Residents from nearby Cedar Village say the recent restriping of the Asbury Circle has only made things worse.

Ocean Township Police keep an eye on the Asbury Circle. Residents say that the new pattern is a nightmare to navigate – but accidents may have declined since it was restriped.

During last week’s Ocean Township council meeting, village resident Florence Hauer asked the mayor and council about their impression of the restriping. Mayor William Larkin said he had gotten a telephone call from Assemblywoman Mary Pat Angelini saying she was receiving complaints about it.
Hauer said the restriping has actually made the notorious circle even more dangerous, because people cut across the double lines, and large backups have been created. The main entrance for Cedar Village is right off Route 66, near the circle.
“(The restriping) is very confusing,” said Mayor William Larkin. For example, he said that when a driver is in a certain lane they are precluded from going in certain directions.
After the meeting, resident Marwin Miller, who also lives in Cedar Village, also said the restriping has made things worse.
“It’s worse, the confusion of it. People shoot out into the other traffic when they find out they are in the wrong place,” he said.
Larkin said drivers were particularly confused when the restriping was brand new. He said only the Collingswood Circle was more confusing.
But Larkin also said he asked the Ocean Township police department to look into the restriping’s effects. The department analyzed data from six months prior to the restriping and six months after.
“We were all very surprised to see the number of accidents went down a lot,” he said, though he did not present any statistics.
He said drivers saw the brand new striping and were driving more carefully as they sought to figure it out. Larkin said the police department will now do a followup study to better determine if safety is better or worse.
“We’re in limbo for another report to better tell,” he said.
Another Cedar Village resident, Susan Borea, had a separate question for the mayor and council. She asked why the township does not place sewer charges on the same bill as property taxes.
She said she used to live in Bergen County and the tax bill she received included a line for the sewer charge, even though the sewerage authority was not part of the town, as is the case with Ocean Township.
“It would simplify things for people like me who don’t like all the paper,” she said.