Ritacco gets more than 11 years

Another school superintendent under investigation 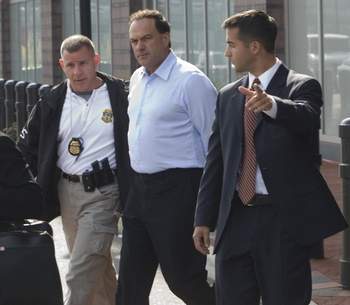 Trenton – Michael J. Ritacco was once one of the most influential and admired school superintendents in the state. For nearly 20 years he ran the Toms River schools with a budget over $200 million and around 17,000 students.

In 2010 his reputation took a turn for the worse after FBI agents raided the district offices and private home of Ritacco. It became apparent that he was a target of a massive federal investigation that finally uncovered that Ritacco had accepted over $1 million in bribes and for 12 years participated in bribery and kickback schemes.

Today, September 14, 2012, Ritacco was sentenced to more than 11 years in federal prison for his parts in the crimes. Normally in a federal conviction case the defendant is allowed some time to get their affairs in order and then allowed to surrender at an assigned prison.

However, that did not occur today. After the verdict was read U.S. Marshalls moved in and escorted Ritacco out of the court to start serving his sentence immediately. U.S. District Court Judge Joel A. Pisano stated that this crime was “the worst case of public corruption I’ve ever seen…This takes the cake!”

Ritacco, 66, was escorted out in handcuffs. He was quoted as telling the judge; “I was a guy who was respected in the community, I destroyed it all.”

The judge strongly disagreed saying that Ritacco had participated in the bribery and kickback schemes for 12 years and cheated Toms River taxpayers out of millions of dollars was not the actions of a good man.

Following his arrest, Ritacco and his supporters steadfastly proclaimed his innocence and said all the details will prove he did nothing wrong. However, just after the district’s former insurance broker, Francis X. Gartland, pleaded guilty to funneling hundreds of thousands of taxpayers’ dollars to Ritacco, three days later the disgraced superintendent pleaded guilty to accepting bribes from Gartland from 2002 to 2010.

Ritacco could have faced up to 25 years in jail and a $500,000 fine, but according to a plea agreement he signed with the U.S. Attorney’s Office on April 5, he agreed to forfeit $1 million, his 2010 Mercedes Benz and more than $8,000 in cash seized in his home during the raid.