Sirianni takes over as Fire Chief 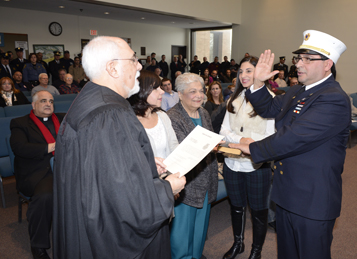 By Walter J. O’Neill, Jr.
New Year’s Day is much more than college football games on TV or people sleeping late from a night of celebrating. In many towns and boroughs it’s also the day that a new fire chief is sworn into office and the department says thank you to the outgoing to chief.

At 11:00 a.m. on January 1, 2014 Angelo Ciaglia became only one of two men in the history of the Long Branch Fire Department to earn the title of “former fire chief”. As Bob Fay, the master of ceremonies at City Hall said, “In Long Branch we don’t have ex fire chiefs, we have former fire chiefs.” Fay himself was chief of the department in 1981.

The first time Ciaglia held the position was back in 1996. “I never had to worry once during any of Angelo’s two tours as chief,” said Long Branch Mayor Adam Schneider. When he first met Ciaglia he told him that he was not big on meetings. “I also told him that I don’t want to be dragged into fire department issues. And for those of you who don’t know Angelo he does not have a problem making a decision.”

“It was an honor and a privilege serving this great city,” said Ciaglia. “We restructured the department making it more cost effective and efficient.” He also added that they upgraded the personal safety equipment and fleet maintenance.

Ciaglia introduced incoming chief Joe Sirianni. He asked Sirianni to remove his white hat, and had every in the room look at his hair. “I don’t know many 45-year-olds with jet back hair, and his wife says he does not color it,” said Ciaglia. “But I’m proud to say I gave him his first gray hair last year.”

“Joe is the only fire chief that travels with two priests and a councilman,” said Schneider. Sirianni’s brothers are councilman Michael, Rev. Anthony (his twin) and Monsignor Sam. “I’m excited to work with my assistants and Tim Somers, the Captain of the Uniformed Division. We are a department rich in traditions. We are not going to reinvent the wheel, we are just going to follow the rules,” said Sirianni.

Sirianni also spoke about the horrible statistics of children killed in schools as a result of violence. “If you take that number and double it that is the amount of children that have died in home fires, and that’s horrific,” said Sirianni. He stated that fire prevention and fire safety needs to be reintroduced and enforced with the youth and parents today.

Moving up to the position of First Assistant Chief is Kevin Stout. He is a retired police officer, currently a Deputy Fire Marshall for Monmouth County and a Forrest Firefighter for New Jersey. He is a volunteer member of the Neptune Hose Company.

Stout had the duty to help dress the newest member of the team, incoming Second Assistant Chief Ron Guidetti. One of the traditions is the turnout gear of the firefighter is in front of the room, and the second assistant chief must get dressed in front of all those in attendance. In years past some shenanigans have taken place with eggs in the boots, but Guidetti kept checking his gear all morning.

With 35 years in fire service Guidetti is no stranger to the role. And the title of chief is something he is also familiar with. For the past 28 years he has been a professional firefighter. Most of his career he worked at Fort Monmouth, but when the base closed he left as a captain. “I took a position at Picatinny Arsenal as captain of that department, and I was promoted to chief of the department,” said Guidetti. He oversees 32 professional firefighters every day. “I know that my experience will come in handy and will be a benefit to the residents of Long Branch.”

“When you look at the experience that Chief Joe Sirianni, First Assistant Kevin Stout and Second Assistant Ron Guidetti bring to the department and the city, we couldn’t afford to pay for it,” said Schneider.

Ciaglia was asked if he would run for a third term as chief. “It’s up to Debbie,” said Ciaglia. Debbie Schmid has been engaged to Ciaglia since his first term as chief of the department. She was also his girlfriend back in 1996 when he was chief in West Long Branch.

“Let’s see. He has been chief twice and we are still engaged,” said Schmid with a smile. “I want to be a wife before he becomes a chief again, so we will see which one he loves more.”

Letting out a big laugh, Ciaglia said he sees how it is. “I could not have done what I have without her love and support throughout all these years,” said Ciaglia. “But maybe you will see me back for a third run.”

Long Branch City council president John Pallone also praised the fire department. “You are running into burning buildings when others are running out,” said Pallone. “But you are more than firefighters, and during Super Storm Sandy you showed that with your efforts.”