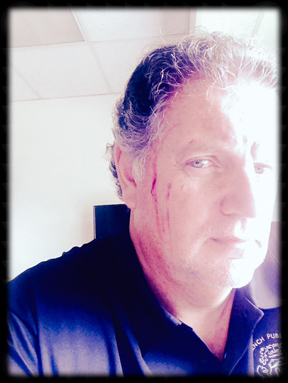 Long Branch – On Wednesday morning around 7:30 a.m. as preschool students were arriving at 540 Broadway, security officers heard a woman yelling for help on Broadway near the intersection of Branchport Avenue.

The woman, said to be in her early 20’s, was running towards 540 Broadway screaming that someone was trying to kill her, but no one could be seen following her. A car with what appeared to be an off duty policeman or fireman was in traffic on Broadway yelling to school security officers not to let the woman near the children.

Two of the school security officers stopped the woman at the driveway entrance of 540 Broadway. Witnesses said that security appeared to be trying to talk with the woman and calm her down.

According to witnesses, the woman then ran out into traffic on Broadway and bounced off the hood of a car that was traveling west, apparently unharmed. The woman than ran towards a school bus that was unloading children.

Walter J. O’Neill, Jr., the District Public Safety Liaison, was one of the two security officers who were outside 540 Broadway. He grabbed the woman using a bear hug and carried her out of traffic and away from the school bus and children. The woman was screaming and resisting the entire time. One witness said there were a lot of children and parents there at that time and the security officers were not only protecting the students and staff, but preventing the woman from harming herself as she kept running in and out of traffic.

“She was yelling that someone was trying to kill her and that he gave her something,” said O’Neill. Protocol for a situation like this calls for an immediate lockout. O’Neill stated that he instructed Raphael Silva, the other security officer, to get the students and staff secured and then call the Long Branch Police Department. “The poor girl was screaming six things. He is trying to kill me. I need a cop. He gave me something. I can’t breathe. I need an ambulance, and children. I made sure that I stayed between her and the children while Raphael, teachers and the paraprofessionals secured everyone.”

O’Neill added that when she said children and started running towards the bus he decided it was time to stop her. “She was completely incoherent. I was trying to tell her that I was a retired police officer and I could call and get her help. But when she started towards the bus I had to restrain her,” said O’Neill.

Witnesses said that O’Neill carried her out of traffic and over to the curb in front of Snow White Laundry, but she was fighting the entire time. She head butted O’Neill and attempted to bite him. “When you’re dealing with someone in that state they have no idea what they are doing. My job was to make sure she didn’t get onto our property or harm our students or staff. Once that was accomplished I wanted to make sure she didn’t harm herself or any bystander at that time in the morning as the area is very busy,” said O’Neill.

“The girl was just overcome with fear, you could see it in her eyes and her screaming would not stop. After she head butted me she attempted to bite my left arm. She did manage to get one hand free for a second and scratch my face, but I quickly regained control and took her to the ground and held her there until the Long Branch Police arrived.”

Jason Roebuck, Long Branch Public Safety Director, said that officers Brian Boryszewski, Mike McGowan, Kevin King and Fire Marshall Greg Papailiu all responded and helped subdue the woman. She was struggling even with all those officers trying to handcuff her. “The Long Branch Police Department are great partners with the school district. They respond quickly and are extreme professionals,” added O’Neill.

The woman was taken into police custody and transported to Monmouth Medical Center for evaluation. Long Branch First Aid Squad responded to check out the cuts and abrasions O’Neill suffered in the scuffle. “The only person who suffered any injuries was me. I had a few scrapes and scratches, but the students and staff were never in danger and that’s all that matters,” said O’Neill. Even the woman who attacked him was unharmed in the incident. “That’s why we train. The object is that nobody should be harmed.”

Police asked O’Neill if he wanted to sign complaints for assault. He refused saying the woman needed help, not criminal charges.

“This is an indication of what society is today,” said Superintendent of Schools Dr. Michael Salvatore. “Student safety is our highest priority and the investment made by the Board of Education has been tremendous,” he added, referring to the extra training now available for school safety officers.

He said that Long Branch schools have safety personnel at each site who are dedicated to ensuring a positive learning environment for the children.

“The training and development of our personnel has added urgency to each of their respective positions,” Salvatore said. “We appreciate the sacrifices our staff makes routinely to protect our children.”