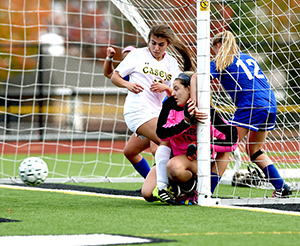 Sometimes that monkey or target on your back can just get too heavy. Red Bank Catholic girls’ soccer team started the season with the top ranking in the Shore Conference. All preseason picks are based on the previous year, and the Caseys won the 2013 Shore Conference Tournament and finished with a 17-2-3 overall record.

Frank Lawrence is in his second year as the head coach of the Caseys. This season has been a little bit of a struggle compared to last, as the team slipped from the top seed in the conference to the eight seed in the 2014Shore Conference Tournament.

On Friday, RBC played ninth seed Shore Regional, coming up one goal short, 4-3.
Shore Regional, with George Moutis in his seventh year as  head coach, was not even ranked in the top ten to start the season. Last year the Blue Devils finished 10-8-3, and this year they have been hit with injuries.
Shore  traveled to Count Basie Park in Red Bank and Friday afternoon to face the Caseys in the Round of 16.
Daniella Caputo, sophomore defender at Red Bank Catholic, scored the first goal of the game. It came at 4:20,  unassisted.

Shore then turned up the pressure and at 13:03 the McDonough sisters, Samantha and Devon, teamed up for the first Blue Devil goal. It was kicked in by Samantha, a senior forward, off an assist from Devon, a sophomore midfielder.

Less than three minutes later Shannon Bonner, junior midfielder, put the Devils up 2-1 off an assist from Shannon Anfuso, a junior defender. The last goal of the first half was the second of the game for Samantha

McDonough giving Shore a 3-1 lead into the halftime break.

Shore only scored one goal in the second half, and that was the second of the game for Bonner. This time assisting on the goal was Jesse Egan, junior defender, at 59.40 of the second half.

The Caseys didn’t give up as they kept attacking the Blue Devils goal. Sophia Demurjian, sophomore forward, and Abigail “Abby” Shroba, senior defender, both scored second-half goals for Red Bank Catholic. Demurjian also had two assists, but it was not enough as the Devils held on and knocked off the defending champions 4-3.
Shore held a 12-10 shot on goal advantage in the victory. Kylie Foggia the senior goalie for the Blue Devils had seven saves. Over in the Caseys net, Jacqueline Robinson, junior, had four saves. With the win Shore improves to 13-3-1 on the season and advances to face Colts Neck, the number one seed. The Caseys fall to 12-6-1 on the season.

For more photos check out The LINK News on news stands now.