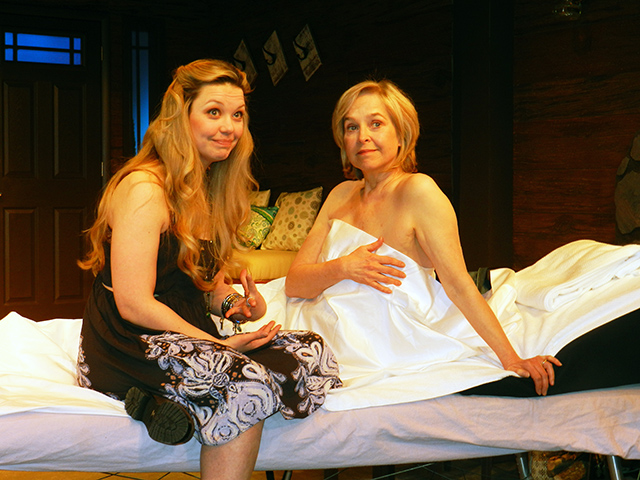 Multi-talented Michael Tucker, who with his beautiful wife Jill Eikenberry played married lawyers on the hit TV show L.A. Law, has written an entertaining and thought provoking play, The M Spot, which once more displays them as a married couple. 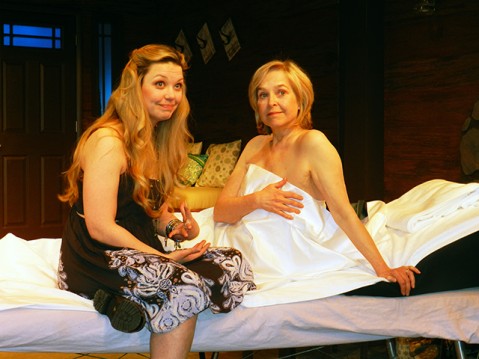 In the first act, half the NJ Rep stage and a minimal amount of furniture indicate Jerry and Maddie’s New York City apartment, and they take turns addressing the audience.

First Jerry talks about his therapist’s scary use of animal metaphors (snakes wriggling backward out of their skins, hermit crabs scuttling naked toward a new home under the eyes of hungry gulls), his inexplicable rash, and Maddie’s objection to his pot smoking.

Meanwhile, Maddie practices an impressive array of yoga poses. Then Maddie gives her view of their marriage, including the narrative of a sexy drive home from the Jersey Shore to Washington D.C. while they were still an illicit couple (later matched by Jerry’s saucy tale of Maddie initiating sex with freshly washed and blow-dried hair), while Jerry tackles the Wednesday New York Times crossword puzzle. We learn that Maddie is a two time breast cancer survivor.

After a few monologues, Maddie tells the audience that now they will hear how it sounds when Maddie and Jerry talk to each other, and they resume arguing about various topics, including whether they should go to a new age spa in Humboldt Springs, California, to indulge in nude couples massage.

The second act is entirely different from the first, but the two acts go together perfectly like the two halves of a long-married couple. Now the entire stage has opened up to show us the beautiful room in the spa (set by Jessica Parks).

The actors no longer address the audience. The first act was divided evenly between Jerry and Maddie; Mr. Tucker has gallantly given the major part of the second to Ms Eikenberry.

Maddie is waiting for Jerry to come back from buying wine. She is joined by Star Rabinowitz (Pheonix Vaughn), a lovely young masseuse, whose hippie chick, manic pixie dream girl exterior hides a core of empathy and wisdom. Maddie is a little unnerved at first, but after hearing the menu of massage choices offered, her apprehension turns to intrigued interest.

Demand for tickets to The M Spot is so high that additional performances have been added on Wednesday nights, March 11, 18 and 25, at 7 p.m. The M Spot is a hot spot, and deservedly so.