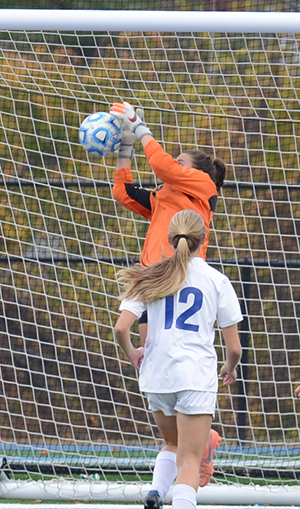 Making a leaping block on a Haddon shot is Shore goalkeeper Katie Colaguori.

By Walter J. O’Neill, Jr
Frankie McDonough is one of the “Fab Five” on the Blue Devils varsity soccer team. Those five players are all freshman with bright futures for Shore Regional High School. 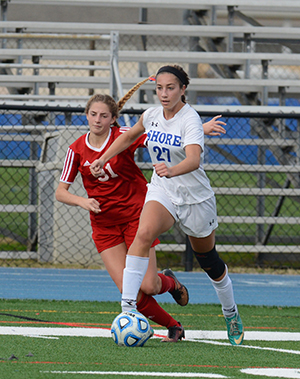 Last week Shore Regional, ranked first in the NJSIAA Central Jersey Group 1 bracket, hosted eight seed Haddon Township in the quarterfinals. During that game McDonough scored four goals and had one assist as the Devils easily won 8-1 and advanced to the semifinals.

Hannah Birdsall, another freshman, had two goals and two assists, while sophomore Sophie Hauritz and junior Katie Stephens each had a goal. Stephens also had two assists as did junior Kelly Bolsch. The Blue Devils had two goalkeepers in the game, Katie Colaguori and Julia Valinoti, who each had one save.

After beating Haddon, the Blue Devils advanced to the semifinals were they faced fourth seed Riverside on November 9, in West Long Branch. Shore easily won 7-1 and advances to the NJSIAA Central Jersey Group 1 finals.

During the 15th minute of the game against Riverside, Birdsall scored the first goal of the game. Three minutes later Frankie McDonough gave the Blue Devils a 2-0 advantage. At the 29th minute off a corner Bonner drilled home a goal putting the Devils up 3-0.  Going into the halftime break Shore Regional was up 5-0 over Riverside.

In the 35th minute Shore took a 6-1 lead on a Stephens goal. The final goal occurred at the 53rd minute on a Bonner goal.

In the finals Shore will face number two seed Metuchen on November 12.

Making a leaping block on a Haddon shot is Shore goalkeeper Katie Colaguori.