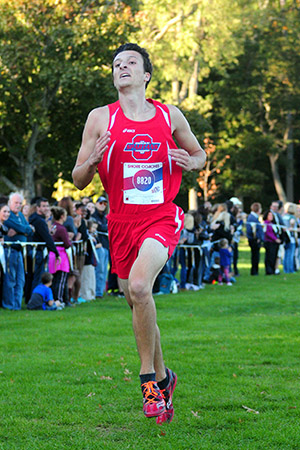 The recently crowned Monmouth County champion easily outpaced the field with a 16:00.07 clocking, 20 seconds ahead of Jordan Brannan of Colts Neck, who finished second timed at 16:20.90.

Brannan had also finished second to Gindi at the Monmouth County Championship and the pair proved they could continue to succeed when facing runners outside of the county.  Following the duo across the finish line were Jordan Laprise, Toms River East (16:35.38); Kevin Knoetig, Toms River South (16:44.80) and Beepul Bharti, Northern Burlington Regional (16:47.66).

Ocean fell short of the team championship, settling for second place with 84 points.  Colts Neck took top honors with a low score of 52 points.  Scoring for the Spartans were Matt D’Auria (11th), Ben Miller (15th), Tom D’Auria (28th) and Dan Dombrowiecki (29th).  The good news for Ocean is that not a single runner in the top five is a senior.  Gindi and Miller are juniors and the balance of the scoring runners hail from the sophomore class.
Following Colts Neck and Ocean in team scoring were Toms River South (100),