Last Monday, December 7 our local Jewish community gathered at Borough Hall to light two candles of the menorah (the eight-branched candelabrum) on the second day of Chanukah.
Mayor Sue Howard joined Rabbi Greenberg for the brief but poignant ceremony, telling of the history of Chanukah before snacking on jelly donuts and coffee. Chanukah, the eight-day Festival of Light that begins on the eve of the 25th of the Jewish month of Kislev, celebrates the triumph of light over darkness, of purity over adulteration and of spirituality over materiality.

Everyone in the crowd of over 30 adults and children received a dreidel; a spinning top on which are inscribed the Hebrew letters nun, gimmel, hei and shin, an acronym for Nes Gadol Hayah Sham, “a great miracle happened there.”

The lovely weather and a renewed sense of faith brought the largest crowd in years to the ceremony. Happy Chanukah everyone!

The next night, an equally balmy Tuesday, saw even bigger crowds for the MB Annual Tree Lighting also in front of Borough Hall. Although not technically a traditional Christmas fir tree, the large Holly tree was hung with hundreds of white lights. After Mayor Howard and Recreation Department Chair Skip Stephens welcomed the crowd, the MB School chorus under the direction of Music teacher Emily Steeber sang several favorite holiday tunes. The countdown began, first by the youngest crowd members and then by the eighth grade girls. And the tree suddenly lit up to much cheering and clapping.

MB’s finest were on hand to make sure none of the kids hwo were hyped up on sugar from all the hot chocolate, donuts and candy canes ran into the street or each other. And that before everyone went home the adults had the right kids in tow since they all looked the same with their ear-to-ear grins and matching Santa hats (also given out for free). 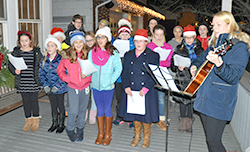 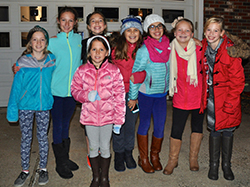 These adorable girls had so much fun singing and running amuck!