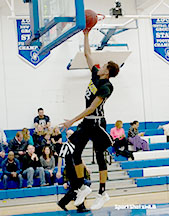 Sportshotswlb Tyler Hawkins (22) a junior at Monmouth Regional goes up for two of his game high five points in the win over Shore Regional.

Last week the Blue Devils of Shore Regional hosted the Falcons of Monmouth Regional in a Shore Conference boys A Central basketball game. Neither team has been setting the hoop on fire this season. Both have played each other several times already this season.

Sportshotswlb Tyler Hawkins (22) a junior at Monmouth Regional goes up for two of his game high five points in the win over Shore Regional. 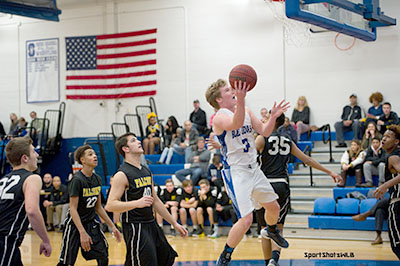 Sportshotswlb Ryan Jones (3) scored in double digits for Shore in the 42-27 loss to Monmouth Regional was of Shore Regional who had 12 points.

First time these two played each other this season was back on December 30, where Shore won that game 40-28. Game two was on January 8, where Shore won again, this time 42-31. The third time was when the Falcons final got the 42-27 win on February 2.

Of the seven teams in that A Central, both the Falcons and Devils are at the bottom in the standings, with both at 1-9. Overall the Falcons have a 2-15 record while the Blue Devils are in last place with an overall 2-17 record.

The first half of action was relatively close. Monmouth Regional only had a 7-5 lead in the first quarter and had a one point scoring advantage, 6-5 in the second quarter. So going into the break they had a slight 13-10 lead.

For the Blue Devils only Ryan Jones was able to score in double digits. Jones was high man with 12 points, while Tom Mannino and Austin Paglia each scored five points, Jared Graff had three and Marco Parrino had a basket in the loss.