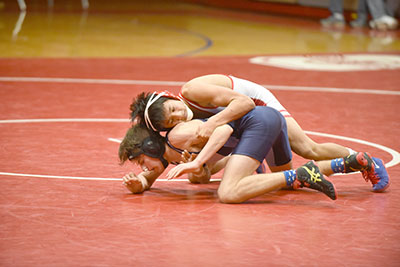 Adam Manzo (top) is the 106-pound wrestler from Ocean who scored a technical fall 17-2 win over Alex Salkin of Freehold Township.

By Walter J. O’Neill, Jr
Less than week from their controversial loss to Middletown North in the Shore Conference Tournament the Spartans of Ocean Township beat three teams and lost to one in wrestling matches.

His coaches told him to grab a leg and pull his opponent into the center of the mat. That is exactly what Jeff Andre of Ocean Township did and won his 152 pound match 7-1 over Thomas Hall.

Walter O’Neill, Jr. LINK sports Scoring at pin at 2:48 of his 138-pound match is Jake Benner of Ocean Township. He pinned Mike Cenname of Freehold Township.

Adam Manzo (top) is the 106-pound wrestler from Ocean who scored a technical fall 17-2 win over Alex Salkin of Freehold Township.

Immediately following the loss to the Lions on January 28, the Spartans beat Nutley 38-35 on January 30. Getting wins for Ocean with pins were Pat Tracey at 152 pounds, Clayton Oates at 195 pounds, Brian Olesen at 285 pounds, and David Tieto at 120 pounds.

That set up the Freehold Township match on February 2, at Ocean. The Spartans coasted through the weights with eight victories. Tieto started the wins at 120 pounds with a pin at 2:30. The next Ocean win was a forfeit for Joe Benner at 132 pounds. Brother Jake then scored a pin at 138 pounds at 2:48.

After Freehold won the 145 pound match the Spartans had back-to-back wins. The first was Jeff Andre with a 7-1 win at 152 pounds. Tracey scored a major decision of 12-4 over his 160-pound opponent. Thompson had another pin at 1:09 of his 182-pound bout. The last two Spartans to win were Olesen at 285 pounds with a major 19-7 decision and Manzo getting a technical fall 17-2 at 106 pounds.

Ocean wrestles in the B North division of the Shore Conference and are currently (as of press time) 7-12 overall and 4-3 in the division. They currently sit in fourth position with Wall at the top 7-1, Long Branch in second at 6-1, Raritan in third at 3-1.

Behind the Spartans in the divisional standings is Colts Neck at 3-3, St. John Vianney 1-2, Red Bank Regional 2-4, and Red Bank Catholic 1-6 and in last place Neptune at 0-6.