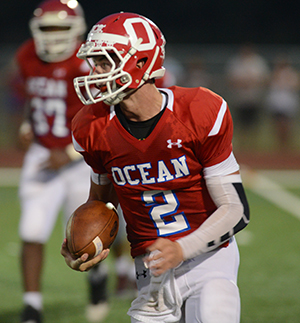 By Walter J. O’Neill, Jr
Just one week ago the Spartans were looking good in the 42-7 win over Monmouth Regional in their Shore Conference football opener. Every aspect of their game plan was working and head coach Don Klein was looking forward to this week’s showdown against Wall Township.

Football pundits had picked the Spartans, who were hosting the Crimson Knights of Wall Township, in a B North match up on Friday night to win. Everyone was saying that Wall Township, which is usually very competitive, was down this year. The players and coaches at Wall didn’t believe in those rumors and neither did Klein.

“You can never underestimate an opponent and never look past any game,” Klein said. He knew  Wall is well coached and is always a scrappy opponent.

Going into the halftime break the Spartans were leading 14-7 over the Crimson Knights, who had scored the first touchdown. However, senior Ocean quarterback

passed for two first half touchdowns. The first to Anthony Tedesco 6 yards out and the second was a 50-yard bomb to Joey Aldarelli.

Wall came out inspired in the second half as they scored four unanswered touchdowns. One play that seemed to sum up the game for the Crimson Knight was a pass play that had the ball bounce off one of the Wall players into the hands of Shane Richey. It was a fourth and four for Wall and the game was even at 14, when Richey took the deflected pass in from 38 yards out to give Wall a 21-14 lead.

Ocean was not giving up as Pickett and his offensive unit worked their way to the Wall eight-yard line. Pickett, who was under pressure most of the game and had to scramble out of the pocket, and from the eight was again forced to scramble. He was out of the pocket and saw a teammate in the corner of the end zone and attempted a third touchdown pass. However, Rickey, playing defensive back for Wall, saw the play develop and undercut the receiver for an interception.