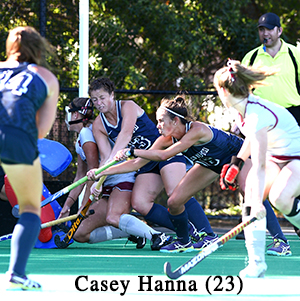 • The goal was Kelly Hanna’s first marker in a Monmouth uniform and her first career game-winner.

good in moving the ball,” said Head Coach Carli Figlio. “Another focus was being able to finish iThree different players scored and the defensive unit limited a high-powered offense to just two shots as the Monmouth University field hockey team defeated Saint Joseph’s, 3-0, Friday afternoon on So Sweet A Cat Field. The Blue and White, which posts its fourth shutout of the season, continues its historic start to the year and improves to 6-1 with the victory, while the visiting Hawks drop their second straight and slip to 4-3.

Alyssa Ercolino’s (West Long Branch, NJ/Shore Regional) deflection off corner shot by Julie Laszlo (Rotterdam, Netherlands /Rotterdams Montessori Lyceum) rang off the opposite post, but Kelly Hanna (Seaville, NJ / Ocean City [Rutgers]) was right at the doorstep to put MU on the board in the 17th minute. Just over two minutes after the break, Meg Donahue (Wyomissing, PA/Berks Catholic) deflected a cross from the baseline to the stick of Rachel Konowal (Plymouth Meeting, PA/Plymouth Whitemarsh) who one-timed it to the back of the cage to push Monmouth ahead by two. Ercolino gave the Hawks an insurance marker in the 50th minute when her blast knocked off a defender’s stick and past goalkeeper Victoria Kammerinke.
Monmouth’s keeper Christen Piersanti (Bridgewater, NJ/Bridgewater-Raritan) made her lone save on a penalty stroke attempt in the 61st minute, diving right to turn aside the low shot to preserve her fourth clean sheet of the season.
“It was a great victory against a very talented Saint Joseph’s team. One of the biggest focuses was protecting the middle of the field and having our recovery runs back to the middle because they are veryn live play, finishing on the cage, and I think we did a good job in both of those areas. The defense was fantastic once again and I think every line did their job, which we will be able to build off of heading into Sunday.

• The goal was Kelly Hanna’s first marker in a Monmouth uniform and her first career game-winner.