NJ NAACP President: We must do better as a nation

In Eatontown, a new look at old ideas for the new year 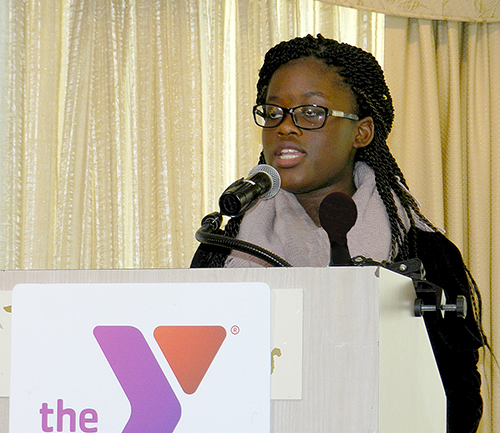 By Coleen Burnett
West Long Branch — The fight for racial equality is not yet over.  In fact, efforts must be redoubled.

That message was clearly and adamantly spoken by keynote speaker Richard T. Smith, the President of the New Jersey Chapter of the NAACP, at the 28th annual Martin Luther King Commemorative Breakfast at Branches on January 16.

At times sounding like a southern Baptist preacher as he cajoled (and sometimes chastised) the audience, Smith told them that the coming changes in Washington have the potential to undo all the gains made in the civil rights movement. In a wide ranging speech where he quoted from Bob Marley, Maya Angelou and Biggie Smalls, Smith told the crowd that they can do better.

For starters, Smith is not a fan of the new President. “Donald Trump is a part of the problem,” he told the 200-plus who attended the breakfast.

He added that this is nothing new — there will always be small-minded people who need to be enlightened on the issue of race.

“This is not the first time that we have met {someone like} Donald Trump,” he said, “Even before he came on the scene, black America was on a roller coaster.”

That roller coaster ride has included the high of electing the first black president in Barak Obama in 2008. The lows came with the deaths of young black men like Trayvon Martin in 2012 and Freddie Gray in 2015. Smith called such events “killing our own.”

“We must continue to speak the truth to {those in} power,” he said. “We must check ourselves before we wreck ourselves… we need to embrace each other more than we do.”

As an antidote to the current political climate, Smith urged those in attendance to hold legislators responsible for their actions, use the power of the ballot box, work harder with law enforcement, and embrace the energy and ideas of the “Black Lives Matter” movement in an effort to make changes.

“We have fallen, my brothers and sisters, but we can get back up again,” he concluded.

* * *
The Breakfast, hosted each year by the Community YMCA and The YMCA of Western Monmouth, also featured the awarding of two scholarships. The scholarships were awarded to Yaneice Dean of Red Bank Catholic and Jessica Gonzalez of Asbury Park High School for essays the two had written about King and justice.

Richard Smith, President of the New Jersey State Conference of the NAACP, delivers a keynote speech about the dangers to King’s Dream.