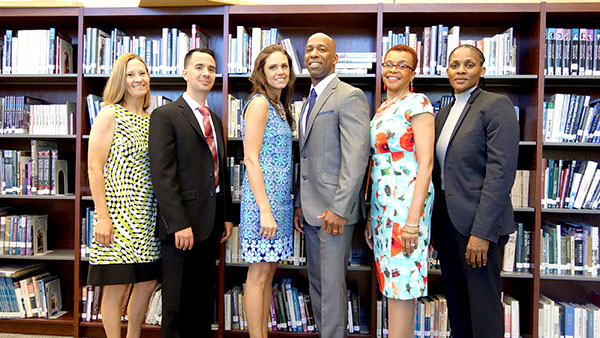 On Friday, April 28, Red Bank Regional High School (RBR) inducted six alumni into its Distinguished Alumni Hall of Fame. The event was sponsored and organized by the BUC Backer Foundation under the Co-chairs Judy Noglows and Teresa Jahns Hottmann. 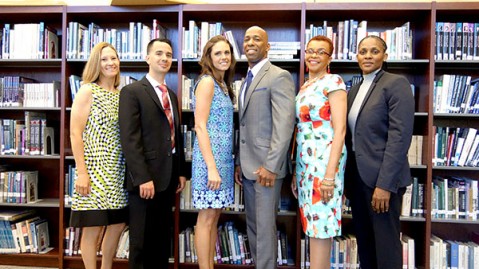 An induction ceremony took place in the RBR theatre with an audience of RBR students and the alumni’s families and friends.  The inductees were introduced by the RBR Buccaneer Newspaper students who wrote bios on the alumni for a commemorative journal. The Distinguished Alumni then shared their thoughts and thanks with the audience. Senator Jennifer Beck also attended the ceremony and personally congratulate the honorees.

RBR senior Edith Torres introduced Dr. Carol Penn, as “much more than a great doctor, an award-winning dancer/choreographer, and a wellness and yoga instructor but as a teacher and a learner.”  She in turn told the students, “Everything I was able to accomplish was because of creativity” explaining how being a dancer prepared her for going back to medical school in the mid years of her life.

RBR Buccaneer Editor In Chief Ella Brockway was proud to write about and introduce her teacher Cassandra Dorn stating, “In her eighteen years here, she has been named the teacher of the year, and has advised the newspaper, the yearbook, and the National Honor Society, a tireless organizer of community service programs.” Ella added “generations of RBR students will surely point to Cassandra Dorn as their inspiration.” Cassandra Dorn shared her personal journey back to the high school she graduated from and encouraged her students to push themselves outside their comfort zone.

RBR sophomore Jack Davis introduced Sergeant Joey Fields as someone who was always interested in pursuing the betterment of people and how that desire flows to his community work in policing with the town of Red Bank. He told the students that his experience at RBR made his job as a police officer a lot easier and that he continues to have so many positive interactions with his alma mater from being invited to speak at Black History month as a key note speaker to working with the students in the community who attend RBR.

Ramona Johnson, whose basketball sports achievement still stands as the leading scorer in BUC history.  However, it is her work with children that defines her life as a teacher in special education.  She told the students that RBR is the best high school in the world as it is very diverse and helped her to understand people and their backgrounds and gave her the greatest gift of “accountability.”

Senior Alex Sosa introduced Dr. Erin Curtis who returned to Red Bank and continued her own optometrist’s practice so she could forge close relationships with her patients. In her remarks she explained, “I dreamt of my patients becoming my friends, of watching their children grow up and living life together in the Red Bank community.  These relationships, this was exactly my dream.”

RBR sophomore Hannah Nishiura wrote about her middle school teacher James T. Pierson who gives back to his community through his volunteer work as a firefighter, auxiliary police officer, and teacher at the Red Bank Middle School. Mr. Pierson recognized the committee for creating this inspiring event. He encouraged the students to “open their minds to have different friends and friends that don’t look like you and help you be a better you.” He told the students to take advantage of the many course choices, and extracurricular clubs and sports, and to work very hard academically.

The festivities continued with a celebratory luncheon catered by the RBR culinary students. Musical accompaniment was provided by the RBR VPA piano majors.  Red Bank Mayor Pasquale Menna and Councilman Michael Whelan joined Shrewsbury Mayor Donald Burden and Little Silver Councilman Daniel O’Hern in honoring the inductees with proclamations from their home towns and the State of New Jersey.