A fond farewell for Ellynn Kahle as councilwoman 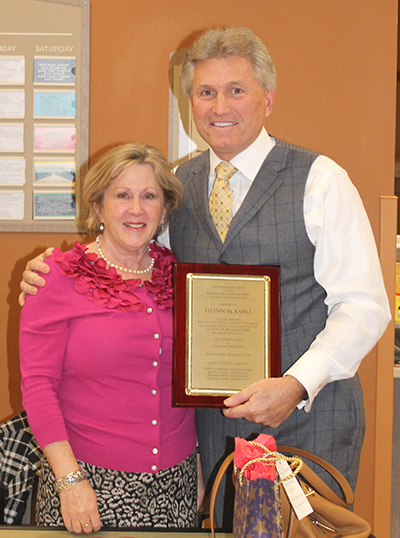 Mayor Jay Coffey presents Councilwoman Ellynn Kahle with a plaque to thank her for her years of service to the borough.

By Neil Schulman
Oceanport — After fourteen years on the governing body, Councilwoman Ellynn Kahle is stepping down.
Kahle, who chose not to run for re-election this year was honored at the last Borough Council meeting of the year on Dec. 14.

Mayor Jay Coffey presents Councilwoman Ellynn Kahle with a plaque to thank her for her years of service to the borough.

“We have somebody here who, pretty close to two decades, has dedicated a good portion of her life to the borough of Oceanport,” said Mayor Jay Coffey as he presented her with a plaque of appreciation.

Several council members fondly recalled working with Kahle over the years. Council President Richard Gallo said that the first time he ran for a full term, Kahle was also running, and told him that they needed to speak with the residents while campaigning.

“I enjoyed working with Ellynn, going door to door, speaking with residents and hearing what they had to say,” he said.

Councilwoman Patty Cooper also had fond memories of learning from Kahle. The first time they met in a political context was at former Councilwoman Barbara Silkworth’s house, Cooper said.

In an emotional farewell speech, Kahle thanked many people.

“I want to first thank the residents of Oceanport for putting their trust in me all those years ago,” she said.

She also thanked Silkworth, who “put me right to work,” and many former mayors and council members, as well as the borough employees, “all of who taught me something to live by.”

Finally, she thanked her family, “who gave up countless hours” for her and Oceanport, volunteering to do everything from hand out lightbulbs to dishing out chili at special events.