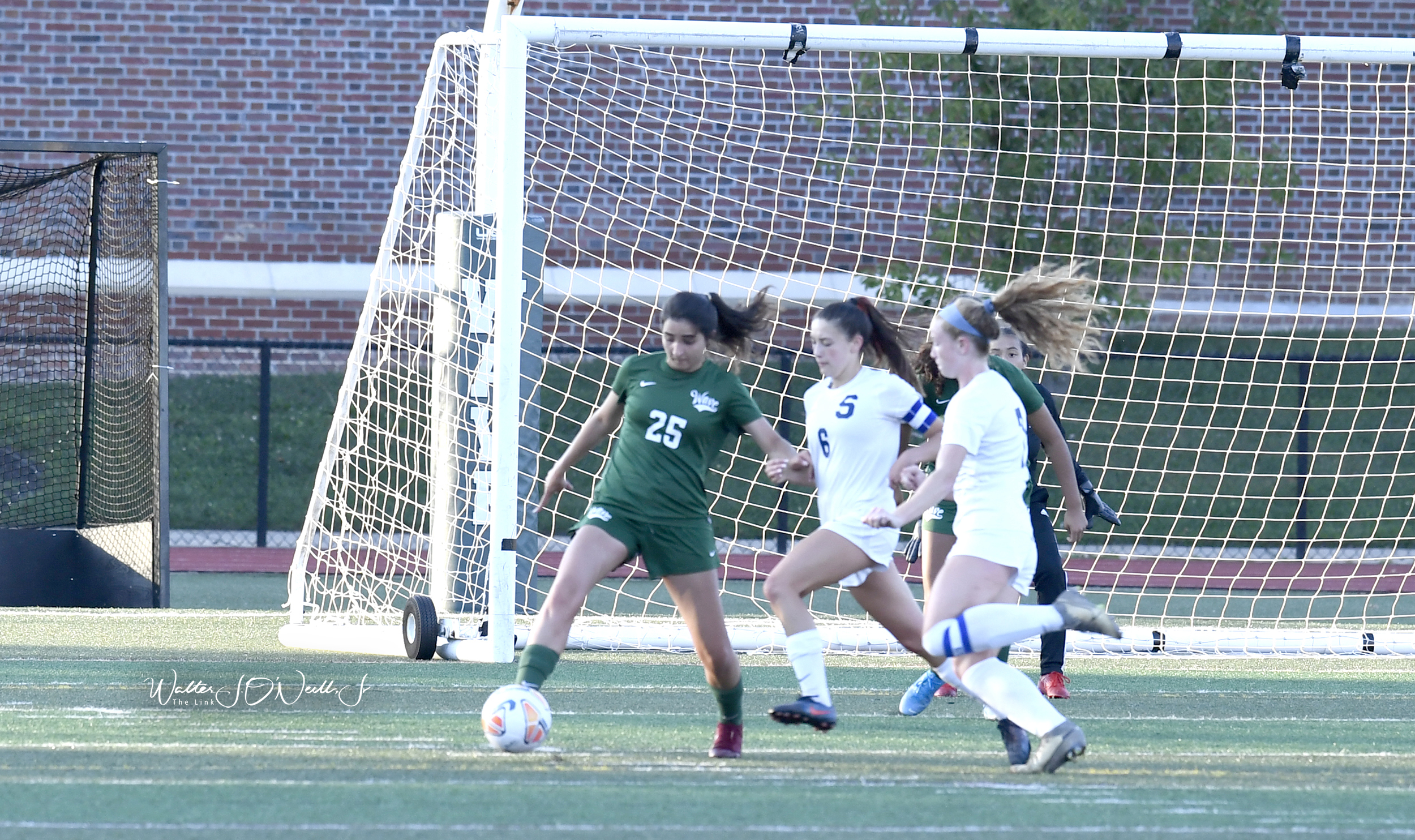 Clearing the ball away from the Green Wave goal is Hellen Silva (25) a defender for the Long Branch varsity squad.

By Walter J. O’Neill, Jr.
Oct.9.2020
The girls’ soccer team at Long Branch High School have found that this year’s schedule is extremely difficult. They opened the season with three consecutive losses being outscored 22-1.The first game of 2020 had the Green Wave traveling to Holmdel High School where the Hornets won 7-0.
At the first home match of the season the Wave hosted the Eagles of Middletown South.

During the first half of action, Middletown South had taken a 4-0 lead on Long Branch, and added two additional in the second. Long Branch scored only one goal in the game, coming in the second half, kicked in by Jenifer Ariza off an assist from Stephanie Silva.

“It was a tough loss on Monday night for the Lady Wave but the girls remained positive and did not give up. The score did not show the true competitiveness of the game, but the girl’s left everything on the field and left the game with pride,” said Head Coach Jessica Wegelin.

Much of the game played in front of the Green Wave goal, pushing the Long Branch defense to its limits. Middletown South took 24 shots at goalie Katherine Bustillo. She made 18 saves in that game.

“We have a very young team, losing 16 seniors from last season, but the girls are extremely close friends and push each other to get better each day,” said Wegelin. Coach credits the senior captains with bringing a family mentality to the pitch. Those captains are Andrea Freije, Stephanie Silva, and Hellen Silva. “This is personally, one of the closest teams I have coached in my ten years and I owe that all to the senior leadership.”

Two days after hosting the Eagles, the Green Wave traveled to Middletown South for game three of the season. After beating Long Branch 6-1 two days earlier, they defeated the Wave 9-0 and improved to 3-0 on the season. In this game Bustillo made 15 saves in the goal.

“At the end of the day, it’s not about the amount of wins the girls come away with this fall, it’s about the memories they have made and the life lessons they have learned,” said Wegelin.

Clearing the ball away from the Green Wave goal is Hellen Silva (25) a defender for the Long Branch varsity squad.

Two Long Branch players get their heads on the ball during the loss to Middletown South. On the left is Andrea Freije Trochez (7) and on the right is Ava Rodriguez (18) while Samanta Ramirez-Posadas (16) of Long Branch looks on.

Jenifer Ariza steals the ball away from a Middletown South player. She then scored the only Long Branch goal is the 6-1 loss.

Taking a penalty shot for the Green Wave is Stephanie Silva (19).

Making one of her game-high 18 saves in the goal for Long Branch is Katherine Bustillo, senior goalie.